Released through Universal Music on 28 October 2016

Iggy Pop. Says it all really. One of rock’s most iconic frontmen, from his days with The Stooges, working with Bowie to becoming a household name in his own right, he’s always been cool, charismatic and intriguing. Post Pop Depression filmed at The Royal Albert Hall in May 2016 is a gem of a DVD. The Royal Albert Hall is quite a place to fill, and large in scale but Iggy does a great job at making sure that everyone feels involved and that the gig feels intimate. I thought I’d like to see Iggy in a more dingy rock ‘n roll club than the Royal Albert Hall, something I could not have been more wrong about as Iggy tears the place apart, the whole audience made to feel special and getting them involved. This is a rock n roll show. And its ringleader is still one of rock’s most unpredictable and captivating entertainers.

Kicking off with band introductions, Joshua Homme (Queens of the Stone Age) introduces the great Iggy Pop and they launch into ‘Lust for Life’. All sharply dressed, they tear through a lively rendition played to perfection and setting the standard for this show. For ‘Sister Midnight’, the stage lighting is fantastic and brings a whole different atmosphere to the show. All the classics here, and a blistering rendition of ‘The Passenger’ is a crowd pleaser with everyone singing the famous ‘La la la’ bit. ‘Funtime’ has Iggy doing a spot of crowd surfing, the iconic singer giving more to a show than any and all bands half his age.

A spectacular version of ‘China Girl’ co-written by the late great David Bowie is a fantastic reminder of the duo’s time writing in Berlin. Closing the show are ‘Paraguay’ and ‘Success’, ‘Paraguay’ showing just how great Iggy’s writing skills are. It’s a belting live number and there is a sense of raw emotion that cuts through. And ‘Success’ is the perfect ender, the band having fun, the crowd partied out, but Iggy, well, you just know he’s gonna be the last guy standing. A beaming smile and a great live gig under his belt, he looks like the guy who’s always having a great time.

There is something about Iggy that’s captivating, his charm shining brightly. And he and Homme work well together, there great chemistry obvious throughout the show. Credit should also be given to the camera team, after all they have their work cut out chasing the very energetic Iggy! A brilliant live DVD and a must see, not just for music fans but anyone in a band looking for a lesson in how to entertain. Iggy Pop is one of rock’s last true legends and this is one of his greatest live performances captured on camera. 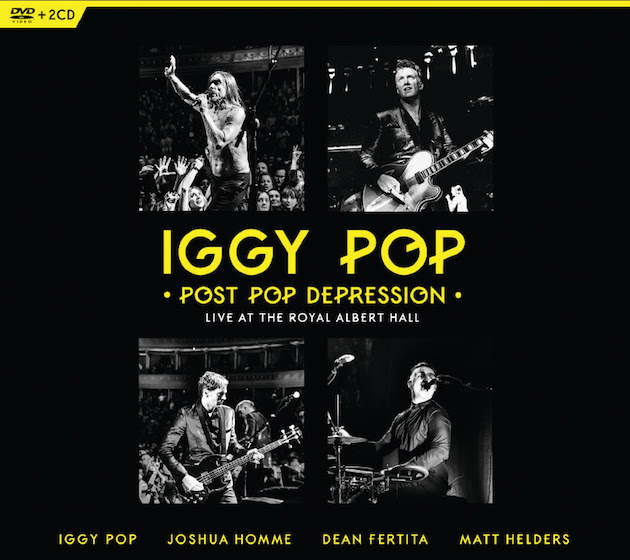