Despite selling relatively few albums during their original incarnation Iggy And The Stooges are now (quite rightly) considered a seminal band who changed the course of music and as the main propagators of punk. However, like most trailblazers they were usurped by those who followed and refined their sound for mass consumption. Born In A Trailer: The Session And Rehearsal Tapes (‘72-’73) not only offers an intriguing insight into the workings of one of the most influential bands of all time but also charts the development of 70’s most inspirational album, Raw Power.

After a two year hiatus The Stooges relocated to London and began recording tracks for their third album, Raw Power. New guitarist James Williamson had pushed the band in a gritter direction and these songs, recorded at London’s Olympic Studio, sound suitably gnarly. Opening with the seminal ‘I Got A Right’ a track which appears, in various guises, 13 times on this disc but, thankfully, it’s a song that never gets old and begins with chords that ring like a fire alarm and serves as a warning to the curious. At this point in their career most of the Stooges were ingesting copious amounts of “substances”, and you can tell. ‘I Got A Right’ is spiky, angular and is delivered with a cheap amphetamine buzz that reeks of Cold War paranoia. The instrumental version is particularly illuminating and brings some not-so-subtle nuances to the fore. Ron Asheton (former guitarist, now on bass) is all over the fretboard and locks in tightly with his sibling Scott who drums in a rambunctious manner and seems intent on pulverising his kit to dust.

For the hardcore Stooges fan this disc is manna from heaven and the alternative versions of ‘I Got A Right’ feature false starts, different lyrics and at differing tempos. However, other songs are peppered throughout which makes this collection an easy listen for the casual fan, too. An instrumental version of ‘Gimme Some Skin’ reveals a funky nature and then becomes far more aggressive when Iggy lays an excited vocal on top. Strangely, both ‘I Got A Right’ and ‘Gimme Some Skin’ never made it on to Raw Power which is perplexing because, even 50 years later, they make much modern music sound lame and weak. The Kingsmen’s ‘Louie Louie’ has been covered by a multitude of artists but the version presented here is surely the most original. Columbia Records insisted that Raw Power contained two ballads so the band offered ‘I’m Sick Of You’ and it certainly wasn’t the syrupy love song the label were expecting! Needless to say it didn’t make the album. Originally released as an EP in ‘77 (along with the final two tracks ‘Tight Pants’ and ‘Scene Of The Crime’) ‘I’m Sick Of You’ evidences what a rich seam the band were mining.

1973 found The Stooges on home turf rehearsing for some upcoming shows and, bolstered by keyboardist Robert Sheff (from Iggy’s previous band the Prime Movers), they sound exceptionally tight. Two blistering takes of the aptly titled ‘Raw Power’ attack the listener with brute force and Sheff’s keys certainly add another dimension. Providing a counterpoint to the muscular backbeat the keys add a certain light and airiness through which Williamson’s guitar crawls like an electrocuted snake and it’s easy to see why Guns N’ Roses chose it for the centrepiece of their covers album “The Spaghetti Incident?”.

This disc’s pièce de résistance is the near 18 minute extended blues workout ‘I Need Somebody/Sweet Child/I Like The Way You Walk’. It seems to alter the very fabric of time so that it passes in the blink of an eye and it’s a track that gently ululates like a ship on a calm ocean. But its not all plain sailing as the stop-start nature of ‘Sweet Child’ induces a feeling of unevenness; a drunken stroll after too much alcohol which is given credence by Sheff’s barrel organ piano. The nuclear warhead that is ‘Search And Destroy’ is delivered with great gusto and succinctly captures that moment in time when, with the Vietnam war raging, the hippy dream turned into a bad acid nightmare. A second, shortened version of ‘I Need Somebody’ becomes mean and moody, more bluesy, with Iggy delivering his vocals like a demented preacher. ‘Gimme Danger’ closes this disc and features a sublime, extended solo from Williamson which crawls under your skin like a bad case of formication.

By the time these rehearsals were recorded Raw Power had been released and the band had played some explosive live shows and that’s just the vibe they bring here. Devoid of the experimentation that characterised the previous disc these songs have an urgent ‘live in the studio’ feel and they don’t come any more visceral than opener ‘Raw Power’. With plenty of distortion on the guitar and Iggy on top form this is rock n’ roll at its most dangerous and, talking of danger ‘Till The End Of The Day’ emanates as if from an opium den (and, judging the band’s reputation it probably did) and has a nice little sting in its tail. A semi-acoustic ‘Gimme Danger’ reveals a softer side before ‘Death Trip’, a bundle of nervous energy, bounces from speaker to speaker like an unruly child (after too much Ritalin).

The Stooges were a band who thrived on inter-band conflict and fractious relationships and in 1973 the conditions were conducive for some good music. James Williamson was fired, then rehired, while original guitarist Ron Asheton was unhappy at moving over to bass and it sounds as if their instruments are bearing the brunt of all this tribulation which turns ‘Search And Destroy’ into an irradiated warhead. For a band bent on self-destruction (and would soon implode) the new tracks offer a tantalising glimpse of what musical territory The Stooges would’ve charted next. There’s the vaguely psychedelic ‘How It Hurts (Rubber Legs)’, the heavy blues of ‘Johanna’ and the evil hypnotists watch that is ‘Open Up And Bleed’. The disc closes on a highpoint with ‘She Creatures Of The Hollywood Hills’ garnished by some otherworldly keys (reminiscent of The Doors) and plenty of jazz inflections evidence a band who refused to stagnate.

For all their crazed “extra-curricular” activities The Stooges took the band extremely seriously and this set of recordings finds them on top form, Chronologically, it follows the previous disc by a few months but it shows a real development, as if these tunes were placed in a time capsule and sent into the future, with ‘Rubber Legs’ blossoming into an all out aural assault and ‘Johanna’ becoming more direct thanks to some judicial pruning. ‘Cock In My Pocket’ is full on, confrontational and in your face, it’s a cocky rendition (pun intended) that still sounds shocking years later and, musically, pushes all the needles into the red. Featuring the sound of a band aflame it set the template for what would become known as punk rock.

The Stooges were an unruly band and it was impossible to guess their next move but this disc indicates they were expanding their sound whist returning to their roots and ‘I Came From Nowhere’ takes ‘Born In A Trailer’ and pushes it to its logical conclusion. There’s plenty of light and shade on offer from the sparse ‘Old King Live Forever’ to the bludgeoning, riff heavy ‘Look So Sweet’ via the muscular cover of Bo Diddley’s ‘I’m A Man’ but, in whatever guise they appear it’s always unmistakably Stooges. By the time these tracks were rehearsed Scott Thurston replaced Robert Sheff on keys and while he hasn’t altered the chemistry he does seem superfluous to the more primitive sound the band were shaping. Case in point being the funky ‘Mellow Down Easy’ and the bluesy ‘Move Ass Baby’ where he gets lost in the mix somewhat. A reworking of ‘Wild Love’ (titled ‘My Girl Hates My Heroin’) brings this collection to a conclusion but it leaves more questions than answers and we can only speculate where the band would have gone from here.

Raw Power had a difficult birth (being remixed by the record label to make it more palatable) but this set, lovingly collated by Cherry Red, shows what The Stooges could achieve when left to their own devices. And it’s pure dynamite. 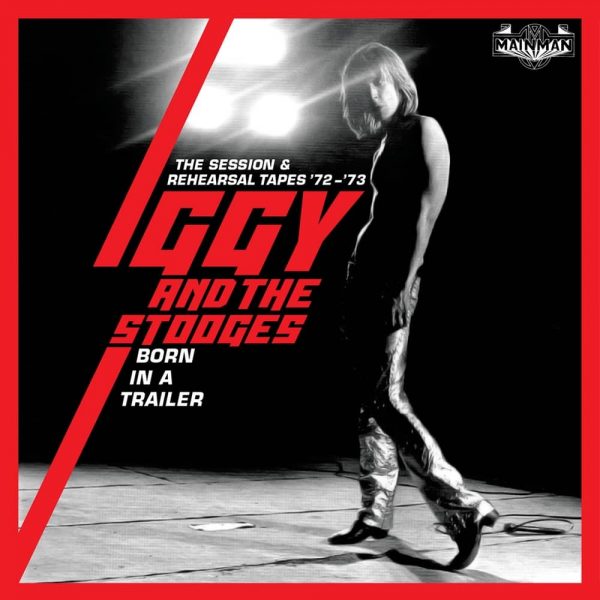