“It was a fluke,” Ian Hunter says. “This was not planned. Really, I’m serious. I really couldn’t believe some of them. I mean, it’s amazing what’s happened. It’s been such a buzz.”

Now in its seventh decade, Ian Hunter’s illustrious career has long been marked by collaboration, from the golden age of Mott the Hoople to his fabled partnership with Mick Ronson and 21st century renaissance with his crack backing combo, the Rant Band. Now, with DEFIANCE PART 1, the legendary singer-songwriter, author, and rock ‘n’ roll star takes creative solidarity to an unprecedented new level with spectacular accompaniment from a truly awe-inspiring roster of special guests, famous fans, and lifelong friends.

The album first came together in early 2020 with the dawn of the pandemic era. An inveterate hard worker, Hunter took the lockdown as a creative opportunity, writing a series of new songs which he tracked in his Connecticut basement alongside his longtime collaborator, guitarist/producer/multi-instrumentalist Andy York. Working with little more than a computer, guitar, V5 piano, and “a very small keyboard,” Hunter and York created a collection of bare bones demos but with quarantine rules still in effect, were unable to flesh them out further by hitting the studio with the Rant Band. Manager Mike Kobayashi and renowned rock ‘n’ roll photographer Ross Halfin suggested reaching out to some of Hunter’s fellow legends who might perhaps use some of their own lockdown to contribute a track or two. To Hunter’s delight, the project quickly escalated, with a galaxy of stars clamoring to be involved. With time on their hands due the pandemic, his fellow musicians took the demos and stems that Hunter and York put together in his basement and added unforeseen power and creativity through their own trademark talents.

“Everybody’s sitting around,” says Hunter. “It’s Covid. Nobody’s going anywhere. We started sending them out. Slash started doing something. Robert Trujillo from Metallica. Ringo Starr, Mike Campbell. Joe Elliott is on a few tracks. Johnny Depp said ‘Jeff Beck’s with me and we’d like to do a couple of songs.’ I know Todd Rundgren, I toured with Todd way back, he’s done an amazing job. Billy Gibbons. Billy Bob Thornton and JD Andrew from The Boxmasters. It’s never ending. I mean, every day we’d get a phone call, this guy wants to do it, that guy wants to do it. It was like, I can’t believe this.”

Despite its genesis during the pandemic, DEFIANCE PART 1 is remarkably upbeat, ablaze with the life-affirming energy and unbridled passion that has marked Hunter’s music since the start. Indeed, “Pavlov’s Dog” is Hunter at his ferocious best, a snarling rocker featuring the surviving members of Stone Temple Pilots – brothers Dean DeLeo (guitar) and Robert DeLeo (bass) and Eric Kretz (drums). Songs like “I Hate Hate” and the album’s rebellious title track – the latter showcasing the one and only Slash on guitar with Metallica’s Robert Trujillo carrying the groove using the late Jaco Pastorius’ signature fretless bass, the same instrument played by the legendary jazz musician on Hunter’s groundbreaking second solo album, 1975’s ALL AMERICAN ALIEN BOY – offer indisputable evidence that Hunter’s voice remains as uncompromising and provocative as ever before.

Having spent the better part of two years on the project, Hunter isn’t done yet. As its title promises, DEFIANCE PART 1 will be followed by the arrival of DEFIANCE PART 2. The second chapter will feature an equally stunning range of special guests while projecting an entirely different thematic approach and songwriting aesthetic.

With the wind at his back, Ian Hunter has somehow managed to pull off something impossible. DEFIANCE PART 1 is a full-speed-ahead rock ‘n’ roll record rarely heard in this day and age, recorded with a crew of irrefutable rock ‘n’ roll all-stars and released on the definitive rock ‘n’ roll label.

“There are a lot of reasons for calling this album DEFIANCE,” says Ian Hunter. “It’s like, people my age shouldn’t be making records, blah, blah, blah. But we’ve still got a bit left.” 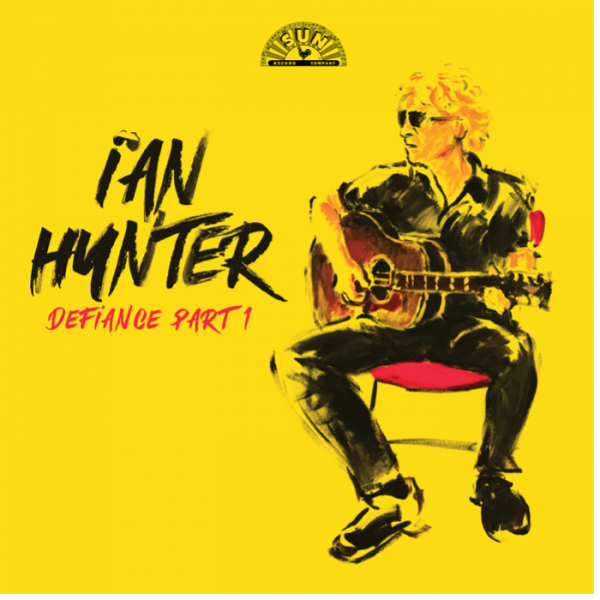