Paul ‘bah humbug’ Castles casts aside the turkey and tinsel to explore Hryre’s debut album, released via Code 666 on September 23, 2016

Hryre are interesting and progressive newcomers from Yorkshire. From Mortality to Infinity is a promising black metal debut, with a few folk ingredients stirred in, that follows on from the band’s EP release a couple of years ago.

The Hebden Bridge trio draw much of their inspiration from their surroundings, by which I mean Yorkshire’s charred and barren moors rather than Sheffield’s Meadowhall shopping centre. As such, Hryre are likely to find favour with fans of Winterfylleth and Wodensthrone among others.

After a frosty opening intro, Hryre start to show their true colours on ‘Devastation of Empires’. Initially this seems to be a reasonable black metal attack but it takes a sharp twist midway through. The rough edges are smoothed out and a softer rhythm develops, on top of which some coldly spoken words rest. 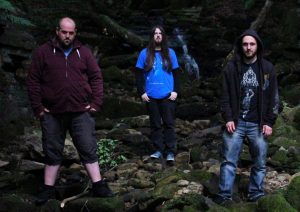 By the time we reach ‘Plague On Ancient Graves’ the Hryre imprint is starting to emerge and become more clearly defined. Strained and stretching out into the distance, the aural ambience is persistent but also well formulated. The songs have time to develop, momentum gathers confidently when it needs to do so and the overall ambience is sustained without ever become fully suffocating.

On ‘Alive Beneath the Surface’ they extend things further, to eight minutes in fact, during which their ability to create and develop a feeling of tension and suspense really impresses. Atmospheric and moody although far from dull, the curves are luscious and the mid-song repetitive rhythm captivating rather than boring. Vocally, Rick Millington’s croaky cries fit in well with the overall sonic soundscape.

Gareth Hodgson is effectively busy behind his drumkit helping to drive the music forward with the band’s third member Nathan Pratchett sharing rhythm responsibilities with Millington.

‘Cast Into Shade’ has two faces with ‘Part One (Farewell)’ a delicate four-minute passage with spoken vocals accompanied by a cleanly picked guitar with choral harmonies adding a beguiling touch. On ‘Part Two (Black Sun)’ Hryre take on a significantly darker appearance. The mood becomes more disconcerting, the grooves are pacier and carry a hint of menace, while the vocals are stretched to something close to breaking point. It does develop into a slightly overlong folk section at one stretch where some of the musical edge is allowed to escape.

The 10-minute ‘Lamenting The Coming Dread’ is another strong track with an icy streak that rarely shows signs of warming up as a relentless scissored riff cuts through the dark atmosphere as Hryre again conjure up those stark and severe images of desolation. Without doubt there’s more to come from Hryre and a little more depth and diversity in sound is required to help elevate them above others trying to succeed in similar fields. But as starters go, From Mortality to Infinity, has much to commend it. 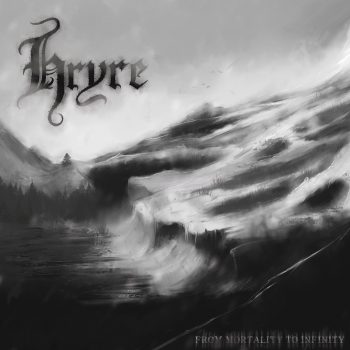