Day 2 saw yet another beautiful Welsh autumn day, and so again the second hall was flooded with sunshine as THIS WINTER MACHINE began their set. They often sounded a little like Camel, which is definitely a good thing, and their songs, including the lengthy Carnivale and The Man Who Never Was are well written and nicely arranged, although after a while the music did begin to sound very samey and there wasn’t a lot in the way of changes of pace. It did strike me, though, that they looked really pleased to be there, even at such an un-rock and roll time of day, and it was nice to see a band take a genuine pleasure in playing.

Next up on Stage 2 were to be Gryflet, but it seemed that they had dropped out at fairly short notice, to be replaced by BB BLACK DOG, and the first thing you had to note about them was that they had a seriously unusual line up, in that they were a trio, comprising a drummer and two bassists, and the apparent front man and spokesperson played from a stool with an oil painting in front of his mic stand. I might add his stage wear came from the ‘trying too hard to be eccentric’ school, including military uniform and a pith helmet complete with goggles, exactly the sort of thing Robert Calvert was doing with Hawkwind forty years ago. The music was largely instrumental workouts with the lead bass used with a lot of effects, which was interesting at first, but the novelty soon wore off, particularly when it was time to move to the main hall for Goldray.

GOLDRAY were one those bands where you wondered how exactly they fit into a so called Prog line up, the more so when the three male musicians emerged wearing sparkly tops, not unlike a 70s Glam Rock band, and if there were glances being exchanged in the audience at that, then the entrance of singer Leah Rasmussen in a feathery scarlet headdress and a full length silver cape only added to the traditionalists’ consternation. But then the music started, and one of the very best performances of the whole weekend was off and running. For me, the best way to sum up their music is to think of early Zeppelin, infused with some psych and a dash of Siouxsie Sioux. Blessed with a great sound, and some great songs, of which ‘The Forest’ and ‘Soulchild’ particularly stood out. Undoubtedly a highlight of the whole weekend.

JUMP frontman John Dexter Jones has an enduring fascination with and empathy with the wartime experiences of his family and with that in mind, the first part of the band’s set was based on songs that were structured around those experiences. As usual, the frontman, as well as doing his usual excellent job leading the band, gave us some of the background behind the songs, in other words a typically fascinating and enthralling Jump set. The rest of the band were first class, with a special mention to Ronnie Rundle and Steve Hayes for their work on guitar. Unfortunately, there was one sour note in the set, when JDJ noted that his beer had run out and wondered if someone would be kind enough to go to the bar for him. One generous punter obliged, but while one member of the security staff let him through to the front of the stage, another, almost forcibly, tried to prevent him handing the drink to the singer. Unnecessary, and a disappointing moment in a great set, but, sadly, over zealous security became something of a theme over the weekend.

A lot of the rest of the day on Stage 1 was dedicated to what you might call ‘classic’ bands, with histories going back to the 60s and 70s, beginning with DAVY O’LIST & THE ATTACK. Guitarist O’List isn’t as well known as he might be, bearing in mind he was an early member of both The Nice and Roxy Music, and also played briefly in Jethro Tull and Pink Floyd, although what I saw of this set was more dedicated to his time in early psych band The Attack, which gave rise to my favourite piece of trivia of the whole day, that they released ‘Hi Ho Silver Lining’ as a single shortly before Jeff Beck did. Unfortunately, because the band didn’t have any sustained success, a lot of what they played was unfamiliar to most of the crowd, but it wasn’t helped by the fact that the band looked and sounded seriously under rehearsed, at time losing their way mid song and having to be counted back in, and had very little in the way of stage presence. I can’t say if they played anything by The Nice or Roxy Music, as I didn’t want to hear what the band would do to it, and anyway there were far more interesting bands playing on Stage 2.

A band new to me, DEAFENING OPERA had travelled from Munich for the festival and made an immediate impact. At time they were a mysterious blend of ZZ Top and Bigelf, with huge riffs and a terrific groove for a progressive band although with more than enough Progressive and symphonic metal elements to satisfy the purists. Fronted by Adrian Daleore, who has a huge voice, somewhere on the Meat Loaf scale, and the band have vison and show signs of having some serious songwriting ability. Closing song ‘Plus Ultra’, notable for including a whistling part, which is something you don’t see at a Prog gig very often, did lose its way a little in the instrumental passages, but they tightened up, and overall this was seriously good stuff. 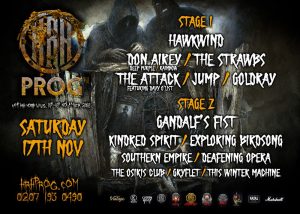 Australia’s SOUTHERN EMPIRE have made this part of a series of dates in the UK, and I really hope they’ve decided it was worth it, as they delivered one of the finest and most exhilarating sets of the whole weekend. A terrific combination of imaginative, progressive hard rock delivered with a clear sense of enjoyment that they did their absolute best to ensure that the crowd shared. Including multi-instrumentalist James Capatch to provide sax and flute was an inspired decision, and there were also fine performances from vocalist/guitarist Daniel Lopresti and guitarist Cam Blokland. A couple of times during the set the band drew standing ovations from an obviously awestruck crowd, not least after the epic ‘Keeper of the Crossroads’, which even with its near half hour length, never outstayed its welcome, moving between its various sections, including a part based around African style tribal drums. An equally impressive ‘Goliath’s Moon’ ended the set, along with another standing ovation, and it seemed the consensus afterwards that this was the Band of the Weekend. Not necessarily my vote, but I can easily understand why.

A change of pace now on stage 2 for EXPLORING BIRDSONG, from Liverpool, whose first impression was that they had a quite unusual lineup. Two keyboardists, Lynsey Ward, who also sings, and Jonny Knight, who also plays bass, plus Matt Harrison on drums and two backing singers, situated at either corner of the rear of the stage, but yet again Stage 2 delivered yet another fascinating band. An undoubted influence is Kate Bush, although Lynsey’s voice is more Sharon del Adel than the legendary Kate’s soprano, but with jazz piano, and Jonny Knight’s dextrous bass. It sounds an unlikely mix, but it really worked, and this was a really interesting and entertaining set. They’ve already played support slots for bands as diverse as Anneke von Giesbergen’s Vuur and Florence and The Machine, and they’re well worth keeping an eye open for.

KINDRED SPIRIT were next up on Stage 2, bringing a properly folky element to the night, with the band featuring violin, flute, even the occasional saxophone. Their songs were OK, without quirte being memorable, and compared to some of the vocals we’d already heard, and would hear later on, Elaine Samuels didn’t really impose herself on the crowd. Violinist Martin Ash tried to liven things up a little, leaping off the stage to play while almost confronting the front row of the seats, but while I don’t think there’s any doubt that the band would goover really well at the right gig, with this crowd, and after some of the music we’d heard earlier, they really struggled to make much of an impression.

And so to GANDALF’S FIST, who had the honour of closing the festival, and possibly the last band to appear at an HRH Prog in North Wales, and to be honest, the event couldn’t have ended on a higher note. At their previous appearance at HRH Prog they’d been an absolute revelation, but this, almost unbelievably, was even better. Despite the fact they had to start their set just after half past eleven, and didn’t finish until nearly one in the morning, as well as the excellence of the music, they also put a lot of thought into their show, and while the old music hall style cross talk of Dean Marsh and Luke Severn might put off some, it does give them an individual identity to their show, which is always a good thing. But their trump card was the presence of singer Keri Farish, who gave us an absolutely brilliant performance, particularly illustrated by ‘Eve’s Song’, when she filled the song with so much emotion, it was almost overwhelming. The band even managed to give us some new material from their forthcoming album and snatched the title of ‘Best Band of The Whole Weekend’ right at the end. Terrific stuff.

So that was HRH Prog for 2018, and it’s now farewell to Snowdonia and off to pastures new. Next year’s event will be a two day affair at Shepherd’s Bush Empire, in London, a change from the usual holiday camp event, and it’s intended that subsequent festivals will be held at the Butlin’s site in Great Yarmouth. Despite some of the disappointments on the main stage, there was some superb music and a great atmosphere overall, although some of the organisation left a little to be desired. As well as the amazing Gandalfs Fist, special mention to Southern Empire, Final Conflict, Luna Rossa, Goldray, and Jump for some memorable sets, because after all, there can’t be much wrong with a festival where you come away with so many good memories and so many great new bands to explore. Hafan y Mor has been a superb venue, Great Yarmouth has a lot to live up to.