Hafan y Mor Holiday Village has been a good home to HRH Prog over the last five years, but, with the site being redeveloped, the organisers decided it was time to move on and so this was to be our last visit to Snowdonia, for any of the various HRH events, at least for a while. With acknowledgement to the fact that the organisers had been badly hit by bands pulling out for a variety of reasons over the previous couple of months, including Don Airey and Friends, Karnataka and Jadis, even so the feeling beforehand was that this wasn’t the most exciting line up, compared to previous years at least, and also, as at previous Prog festivals, had decided to adopt a fairly elastic definition of what constituted Progressive Rock.

So after the customary VIP-ticket only event on the Thursday evening, which this year featured Martin Barre (ex Jethro Tull) and The Crazy World of Arthur Brown, playing probably the same set as they’ve done for most of the last fifty years, the festival proper began early on Friday afternoon, on the second stage with 1 AM THE MANIC WHALE. Two things struck you as the set began, firstly that they’d drawn a really good crowd for so early on a Friday afternoon, and secondly, that the organisers had taken the decision to install seats, and, it transpired, in Hall 1 as well as Hall 2, for the whole weekend. I Am The Manic Whale play a fairly straightforward variety of melodic prog, heavily influenced by the neo-prog bands of the early 80s, although at times I was put in mind of the near-legendary 1970s US band Starcastle, which isn’t a bad thing at all. I didn’t think the vocals were that strong, although bassist Michael Whiteman has a decent voice, but the vocal harmonies on ‘Strandbeast’ in particular didn’t help the song at all. It was a set to dislike, but equally there wasn’t a lot to get overexcited about, either.

The first visit to the main arena was to see veterans HAZE open proceedings. Essentially a three piece, guitar, drums and Chris McMahon doubling on keyboards and bass, they’re augmented on many songs by flautist Ceri Ashton, although on the sections where her flute wasn’t featured, she did look a little awkward standing centre stage without a lot to do. Nevertheless, when she did play play, she brought a welcome variety to the sound. Because of this and the band’s obvious pleasure in playing, it lifted the set to a different level, and while it was recognisably progressive rock, their songs also had a shape and structure that was a lot more than stitching a lot of separate parts to make up a longer one. It’s often a good test at events like this to ask if you’d want ot see them again, and in Haze’s case, that wouldn’t be a problem. 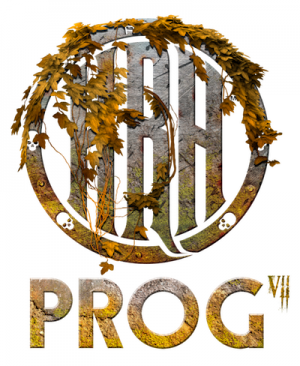 Returning to the theme of having a fairly wide definition of what constitutes progressive rock, next on the main stage were Irish folk veterans TIR NA NOG. They seemed an odd choice to be playing a Prog festival, other having emerged at the same time as the early emergence of what has come to be known as progressive rock. Playing as a duo, with percussion, guitar, assorted effects and occasional violin, they had some good, traditional sounding songs, but despite the attempts to very the formula, they didn’t really hold the attention.

Meanwhile on the second stage, it was interesting that, at this early stage in the festival, it was the smaller arena that seemed to be drawing more people in than the main hall, including when Great Yarmouth’s MOTHER BLACK CAP began their set. Far more akin to prog than several of the other bands on the bill, they have decent songs, but there is a certain lack of variety and variation in what they do. If you’re not familiar with their music, it did begin to sound a little samey after a while, and although they’re not a bad band at all, it wasn’t as memorable as it might have been.

Stoke on Trent’s FINAL CONFLICT were next on Stage 2 and proved to be one of the nicest surprises of the weekend so far. Solid songwriting and, thankfully, a band that seemed to have an accelerator pedal to provide a welcome change of pace. Their songs also seemed to have some thought behind the arrangements, with the twin guitars and dual vocals woven into the songs nicely. I liked songs like ‘Return of the Artisan a lot, and ‘Hopes and Dreams’ nearly as much. TYhey reminded a lot of Pallas, which isn’t a criticism at all, and they were easily the best band of the day so far.

Back to the Main Stage to hear some of TIME COLLIDER, from Cornwall. They seem to have all the ingredients in place to make their mark, but again there was something missing. They could play, definitely, and I was particularly struck by the work of bassist Jay Jay, but the songs didn’t really come alive in the same way, as say, Final Conflict’s did, and so didn’t really lodge themselves in the memory, although without much in the way of stage announcements, I can’t tell you the name of the song that leaned on a very similar riff to Baba O’Reilly. In the same way, a lot of the time, the band seemed to tread a fine line between Prog and AOR, but without enough of either to mark them out. Listenable, but unremarkable.

After Time Collider, there was a chance to see some of GU-RU. No relation to the German Art Rock band of the early 1970s, these musicians originate from Leicester, and were undoubtedly quite different to almost everything that had gone before. Playing tonight as a three piece, keyboards, flute and drums, they gave us a whirling mix of prog, psych, jazz and funk, with several elements of the Canterbury Sound, but the funk elements gave it a character all of its own. There was even dancing in certain areas of the hall. Great musicians, proper groove, and while it’s not really my own cup of tea, they had a great reception from a very appreciative crowd.

With Panic Room seemingly on hiatus, Jonathan Edwards and Anne Marie Helder have been able to do more work with their LUNA ROSSA project. For the most recent gigs, they’ve been augmented by the rather wonderful Sarah Dean on harp, keyboards and vocals, and the result is often stunning, as with the combination of the harp and Anne Marie’s voice on Fly Away. It’s not all ethereal seriousness, Jonathan Edwards drew a cheer of recognition when he began playing the piano intro of Zeppelin’s ‘No Quarter’, before Anne Marie dryly introduced a song called ‘Disappointment’, and yet they were also able to let her give her vocal talents full rein with a tremendous reading of Abba’s ‘The Winner takes It All’, possibly the first time the Swedes have had a song covered at HRH Prog. She undoubtedly has a fantastic voice, this was probably the single best vocal performance of the festival so far and very few others even came close to it.

After Luna Rossa had finished raising the bar for the rest of the show, proceedings on the main stage were concluded by ‘Neo Prog’ stalwarts PENDRAGON, with this date forming part of their 40th Anniversary tour. The hall was easily the fullest it had been all day, although this did have a downside as some of those less interested in the band often drowned out the music with their conversations. Nonetheless, augmented by a pair of backing singers, the band put in a sound performance. ‘Two Roads’ really made an impact, and there was also a really good ‘Green and Pleasant Land’. It’s always a pleasure to see Pendragon in action, and they ended the first day on a high note.