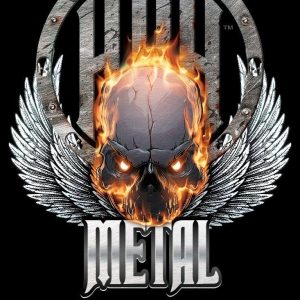 In the month that the Second City said farewell to it’s favourite Heavy Metal Son’s, it’s only fitting that Chic Festivals should bring its HRH Metal weekender to the birthplace of the genre that launched a plethora of musical careers spanning the past 5 decades.

HRH Metal is the latest genre specific event from the camp that brought us the original HRH and Hammerfest weekends and for it’s first one it’s assembled some of the best unsigned and underground metal acts in the country to rub shoulders with some real heavy hitters such as headliners Sodom and Skindred.

The event kicked off at on the Saturday at the O2 Academy complex right in the heart of the birthplace of Heavy Metal, in fact less than half a mile away from the legendary Crown pub where Black Sabbath played their first gig!
All three rooms at the O2 would be used over the two days, with Newports finest Skindred headlining day 1 and German Thrash Metal giants Sodom closing out the weekend.

The whole weekend though is full of some very popular and familiar names on the Midlands Metal scene, all proud to be part of that legacy that started here 49 years ago with four working class lads from Aston and the honour of opening up the weekend went to Birminghams heaviest band right now, Burden of the Noose and with the other two stages not starting till later on in the day, the small room was rammed from front to back to see the Burden boys smash away any early afternoon drowsiness with a blistering set of pure sludginess, the only danger being that such an aural assault would leave you reeling when the other bands came on! The sheer wall of noise and front man Andrew Barraclough’s piercing vocals and equally piercing stare burn through every sense, a great way to start a weekend but surely this band should be commanding a bigger platform.

The band having the unenviable task of following such an explosive opening were Bloodyard. I first saw this band when they graced the New Blood stage at Bloodstock, one of many such bands this weekend that have won M2TM competitions around the country and appeared at BOA showing that that particular journey can lead to other great opportunities.

Bloodyard are not fazed in anyway by the task in hand, with a fast paced set of brutal Death metal. Vocalist Donna Hurd has one of the best death metal growls on the underground scene at the moment, proving that gender is irrelevant if you’re good enough, and Bloodyard are good enough, keeping the room full throughout their set.
With main stage due to open up with Bearfist at 3pm, Leicesters Internal Conflict must have thought they’d drawn the short straw, but their high energy brand of melodic thrash driven metalcore manages to grip the crowd by the balls and keeps them firmly in place and the room stays full.

Meanwhile, the aforementioned Bearfist had the honour of opening up the main arena stage. Hotly tipped to be a force to contend with in 2017, the band from Essex are slick and have some killer riffs, but after the intensity of the first three bands in a small packed room, the atmosphere was nowhere near as electrifying.

So back to stage three I trotted to catch another local Birmingham band who have been working tirelessly this last couple of years. No youngsters these though, Vicious Nature have a long history with members from the likes of Marshall Law and Cerebral Fix and that pedigree and experience shows with a top drawer performance of pure heavy rock. Anthemic songs that encourage the crowd to get involved and fast melodies that keep the headbangers happy. Another triumph for stage three.

5pm meant stage two was about to open and again, honour was given to local outfit Winter Storm. With the other two stages well under way and with a great atmosphere, especially on three, you could excuse Winter Storm being slightly nervous and not knowing what sort of reception they would get, but there was no need to worry. In singer Hannah’s own words “s**t”!! as they came out to a pretty decent crowd and proceeded to reward that crowd with a great set of symphonic power metal. Hannah’s haunting vocals are balanced by the ferocious shredding of Wayne Taylor on rhythm, a good mix of light and dark which suits their overall style completely.

Back over to main stage and ever popular thrashers Savage Messiah were ripping it up despite bass player Mira Slama collapsing on stage with a dodgy knee, but with a little help from the crew and a stool, he battled on. Nothing fancy here, just good old British Thrash done well.

I had time to relax a bit and just generally soak up the atmosphere as I walked around the O2. There was a great vibe, everyone was having a great time. I’ll hold my hand up and say I wasn’t sure if this weekend could work at this venue, but so far so good, the flow around the complex was good and there was always something going on, whatever your tastes in metal, although some more extreme Black Metal might have been nice at times.

Next band to grab my attention were the avant-garde crossover troubadours, Senser. Mixing influences from punk, hip-hop, funk and metal, Senser were always outsiders but gained a reputation for energetic live shows and thus gaining a strong loyal following, so with their recent resurgence there was a lot of interest and expectation. I was a little disappointed, the songs were great, the interplay was good, the music was pumping, but for me the spontaneity, anger and venom that singled out Senser in their early days just wasn’t there anymore. Nostalgic, but just that. If you’d not seen or heard Senser before then go listen to the original recording of “Stacked Up”

Feeling slightly let down I needed some heavy grooves to lift me up, so back to stage three and local heavy weights Left for Red were about to unleash the beast on the small stage. Again the room was packed, a real treat to see and an ongoing theme all weekend, and the Black Country boys lifted the spirits again with their heavy NOLA inspired groove metal. LC Decoy looks decidedly ungraceful on stage, and as frontmen go he’s not as extrovert as some, but boy can he belt out a tune. Another great example of a band that has stuck together through thick and thin and worked hard at what they do, and now reaping the rewards such as a special invite to play Bloodstock and other great festivals such as this. Normality restored and then taken up another level to 11 with the arrival of genre busting Ballsdeep.

Again I have to leave the pulsating womb of stage three and enter the main auditorium for the final two bands on there. Before the final act of the day we had another stalwart of the British thrash scene, Evile. Recently back from line-up changes and record company shenanigans, Evile are looking to get back to a point where they were at a few years ago.

The ever popular Oli Sykes has been replaced on lead by Piers Donner-Fuller, previously of bright young hopefuls Fallen Fate, and he has filled those very large boots admirably, and again, it was a solid performance, but felt a bit flat to me. I think by this time the majority of the audience were only hanging on for Skindred and apart from the first few rows, most of the room seemed ambivalent towards them, a sure sign that in this cut-throat business at this level, if you go off the scene for any length of time you can’t just pick up where you left off. Time will tell of course, but they need to do some hard slog if they want to get back to where they were.

So after a full day of metal from across the spectrum, the last band of the day take to the stage and if you were feeling a little weary then the bombastic joviality of Benji Webbe and his crew soon wash away those feelings as the room bounce along to the ragga-metal hybrid that is Skindred. I know many “Metal Heads” don’t regard Skindred as metal, but they do have a massive following in the metal scene for their infectious blend of reggae, dub and metal and it’s the perfect way to end a party.

And so ends Day 1 of the inaugural HRH Metal, overall a successful day and already people are talking about next years event!