Having abstained from drinking the previous day, I’m more on the ball today to get down for the full line-up – first though I spent the morning setting myself on fire and pouring freshly boiled kettles of water over my head in a vain attempt to feel mildly warm. I failed miserably. I tell you now these kids today with their summer time festivals don’t know they’re born. You know you’re hardcore when you cocoon yourself in a thick blanket with a hot water bottle pile three quilts on top of yourself and still wake up shivering – This is definitely a festival to separate the men from the boys! #TooColdToPoop

Today’s openers The Radio Sun have travelled half way across the world to play for us and it’s great to see a healthy turn-out for these Australians! They have recently released their second album Heaven or Heartbreak which, in a great unintentional comedic moment, frontman Jason Old totally forgets the name of! They have quickly built a strong following within melodic rock circles in recent years and the positive and enthusiastic response the band get throughout their set is testament to that.

The Radio Sun don’t play straight ahead melodic rock. Whilst that does lie at the core of their sound they have a more modern contemporary vibe and do push things into what I’d call Americanised pop rock territory which gives them a fresh take on melodic rock and obviously at a festival like this adds to the diversity of what we can enjoy!

Jason Old is a jovial frontman, down to earth and has a great sense of Aussie humour. The band as a whole are a well-oiled machine, they obviously practice and play live a fair bit back in Oz. Lead guitarist Steve Janevski really impresses as he delivers infectious guitar licks and intriguing solos. I think the band definitely put smiles on their established fans’ faces who are given this rare opportunity to see the Aussies on a stage in the UK but also I think their upbeat feel good set really endeared them to newbies and I’m sure they came away with lots of new friends and fans. An exciting and entertaining band who definitely got things kicked off with a bang!

Highlights of their solid set for me would be ‘One in A Million’, ‘Dying Without Your Love’ and ‘Hanging By A Thread’. A cracking band with an addictive sound I hope they come back to our shores again soon!

I have a vague knowledge of The Burning Crows and I can’t say I’m a huge fan of theirs, but I thought I’d stick around and give them a chance. They have a strong blues based hard rock sound that is really popular at the moment, think Black Stone Cherry and their ilk, and if I’m honest the crowd seemed to enjoy them. A solid performance of strong guitar riffage and gritty vocals and I can see why hard rockers would take to them. Personally I wasn’t overly struck by them and I felt their songs were a bit too similar. They play in a very oversaturated genre and a lot of it blurs into one for me – it takes a lot to stand out and be original within it. Fair play to the band though as in the main they seem to have the crowd entertained!

I’ve been a fan of Newman since the dawn of time and with the amount of albums he has under his belt the only way he’s going to play all my favourites is going to be a five hour set with no breaks and even then I’d probably still demand one more! Newman, as he always does, balances his set to span and include most his career to keep hardcore fans happy, what you’re essentially getting is a greatest hit set!

I’ve been fortunate to catch Newman live a few times over the last few years and he and his band seem to only get stronger and stronger. I definitely see them as been far more confident and comfortable on stage now and with Pete Newdeck on drums they have a stronger live sound. Newman fans should have been appeased by a set that flashed by in a heartbeat and left us hungry for more, the humour shared by all members of the band adds a real warmth and entertainment to their show and it really helps the crowd connect with them.

Their opening track ‘The Elegance Machine’ is the only song from their latest album but it kicks things off with a good energy which doesn’t abate throughout their set. The following triple play of ‘Every Moment’, ‘Feel Her Again’ and ‘Stay With Me’ are probably my highlights but the crowd as a whole got nosier as the sent went on. The humorous Van Halen ‘Panama’ intro into ‘Primitive Soul’ went down really well before oldie but extremely goodie ‘If It’s Love’ keeps the Newman fanboys from rioting and they close their set with what has become the band’s anthem and fan favourite ‘One Step Closer’.

Newman and Co delivered once again, they are without doubt one of the best and most unique British melodic rock bands of current times! Miss them at your peril, ’cause they are awesome!

Another band I’ve been following for some time is Talon and it’s great to see the Americans make the long ass journey over to play for us! I have to give these guys a real shout out for coming and bringing their A game. Michael O’Mara openly admitted to been very tired and jet lagged and I’m sure the rest of the band were too but they still put on a great bombastic melodic hard rock show. Us established fans appreciate the opportunity to see them live and they gave us their best and we rocked out!

O’Mara’s vocals were powerful and he put on a great frontman performance tiredness aside! Guitarists Kory Voxen’s crunching and insistent guitar riffs from the likes of ‘Wrecking Ball’ and ‘Paradise’ really got us going and were note perfect. Drummer John Parker is a powerhouse drummer and he put in a storming performance on the kit giving every song a real kick and bombastic bite!

Another set that went by in the blink of an eye and left us hoping for more! A good cut of songs from across their four albums including ‘Spun’, ‘Sin City Sister’, the rambunctious ‘Holly Would’, sing along ‘Set Me Free’ (if you can remember the words!), ‘Raise em High’ and ‘Eva’.

Talon have huge sound, a real old school melodic hard rock vibe that ticked all the right boxes with us die hard melodic rockers. I’m really glad the Talon guys made the journey because they put on a hell of a show!

Marvel were always going to be a wildcard, and the question asked by many leading up to this festival was Marvel who? I’d done a bit of research, which in retrospect I wish I hadn’t and I was not looking forward to their set at all. Essentially a bluesy hard rock band, but extremely quirky and working the gimmick element to the max with stage costumes and names like the ‘Aviator’ and all wearing matching ‘Batman’ masks which was a bad move because I AM BATMAN!!!! Shhhhhhh….

Luckily for me a happy band of Swedes and Marvel fanatics set up shop next to me and scream and holler their voices raw for them – but much like the sound man I’m fighting a bad case of narcolepsy and most possibly the comedy gold moment of the entire weekend is Marvel’s lead singer pointing out and waking up the sleeping sound man – freaking hilarious! Not my sort of thing at all, but they do put on a show for those that do enjoy them!

I know a few have seen the Dan Reed Network since their recent reformation but this is my first time. I’ve seen Dan do his solo thing a few times and he is a fantastic, personable and emotion driven singer and puts on wonderfully intimate shows. So I was not prepared in the slightest for Dan Reed the rock n roll machine; floor, jaw, straight through! Reed the rocker can really give the mighty Danny Vaughn a run for his money as an energetic and entertaining frontman. Tonight shows a totally different side to Reed as a performer, less introverted and all about getting every one up and grooving! I really wasn’t expecting it and loved every moment of him bouncing round the stage and dropping out some of those awesome vocal melodies.

If they had managed to slip ‘Ritual’ and ‘Tiger In A Dress’ into what was already a killer storming rock n roll spectacle they may have caused of riot! Without doubt one of the outstanding performances of the weekend. The crowd were noisy as hell and sang back virtually every word to them judging on crowd reactions the Tyke’s and the Network were definitely the heroes of the weekend! Lots of smiles all round throughout the venue and following their set!

In the middle of their greatest hits set we get a new one, ‘Divided’, which is from their new album out in June and it’s a killer ultra-melodic tune that definitely got my juices pumping. If this song and performance is anything to go by it’s awesome to have the Dan Reed Network back in the game.

Obviously ‘Rainbow Child’ was a really awesome moment but so many songs raised the roof off, ‘Baby Now I’, ‘Make Her Mine, ‘Get To You’ the list goes on! Here’s hoping these guys follow the Tyke’s example and become firm fixtures on our gig calendars and new album purchase lists!

80’s icons Quiet Riot now feature popular Love/Hate vocalist Jizzy Pearl and whilst this line-up isn’t the original but with Kevin Dubrow no longer with us this is the closest I will ever get to see this legendary band so I’m very excited about it. Sound wise as it was last year the sound and the sound engineers have been spot on and flawless for all the bands, no easy task at Festivals BUT they crank the sound a little too much for Quiet Riot and I personally felt if they knocked it down a notch they would have sounded a lot better – am I getting too old?

Jizzy Pearl may not be the greatest singer in the world but he knows how to entertain and he does this style of music perfectly. Frankie Banali is quite possibly sat atop the highest drum riser known to man pounding away a thunderous backbeat like a mad man! A solid heavy raucous rock n roll show that demanded some serious head banging from the crowd – like them or loathe them there is no denying that as live unit they kick some serious ass! A fantastic rock n roll ending to a manic and enjoyable festival!

Yes, I know Gilby Clarke had got the late shift but I was never a Guns and Roses fan so I decided to call it a night and have a few can’s back in the Igloo and rock out to the new Vega album!

The line-up for this year’s HRH AOR wasn’t the best on paper but it ended up been another very enjoyable weekend. The damn cold aside, having everything on site helps give a really relaxed and chilled feel to the whole event and there is an extremely friendly atmosphere – I think this may be to do with everyone being in a constant state of mild drunkenness. They have definitely made a fan of me and I’ll be back next year regardless of the line-up – although Speedwagon would be nice!

See our review from Thursday here 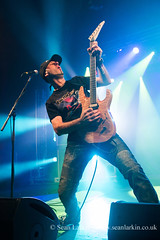 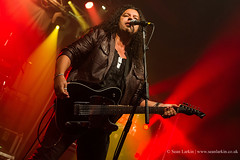 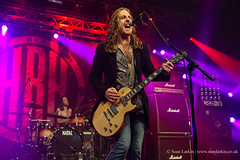 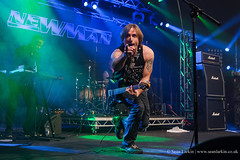 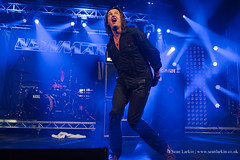 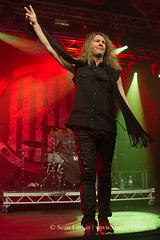 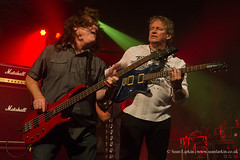 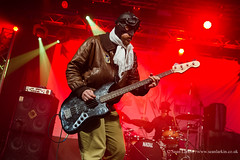 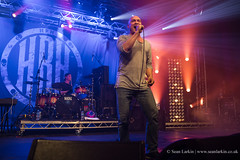 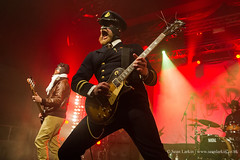 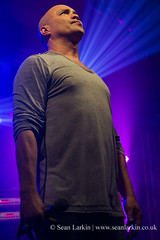 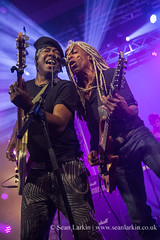 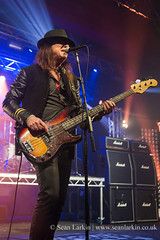 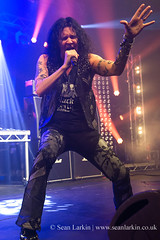 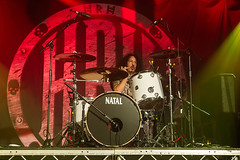 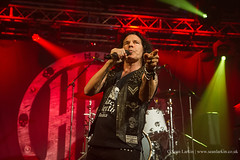 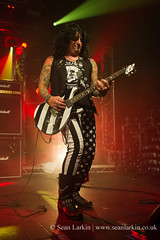 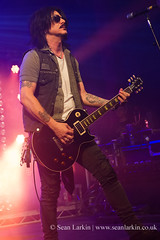 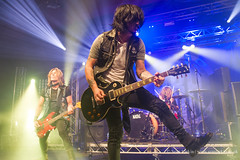