Sure to make any dislocated AOR fan feel closer to home…

No relaunch, of course, just a new way of saying “cover versions”. Picking relatively obscure songs is a clever trick. It immediately suggests an expert and encyclopedic knowledge of the genre. It wrong foots critics, ready to pounce on mimicry or arrogance and it gives you the chance to add something fresh to an old song. So, six imaginatively chosen covers (not all successful, but 10 out of 10 for effort) and 4 impressive new tracks. And what was once a duo is now a band, with, most notably, talented producer and keyboard player, Ricky Delin becoming a full time member behind founder and vocalist, Hank Erix.

I’ve come to the view nowadays that the essential characteristics of melodic rock, AOR, call it what you will, reside in its ability to stay the same, rather than in its ability to change. And so, adopting that philosophy, rather than dressing them up in the emperor’s new clothes, Houston’s covers of 2 genre defining songs, John Farnham’s ‘Justice For One’ and John O’Banion’s ‘Love Is Blind’ stand head and shoulders above covers of more recent material. The hollow, highly manufactured tone of One Republic’s ‘Counting Stars’ is impossible to eradicate, despite Delin’s light touch. And even when that very lightness of touch creates a spine tingling mixture of female defiance and pure pop innocence on a cover of Lady Gaga’s self regarding ‘Do What You Want’, a duet with Lizette VonPanajott, the song seems irrelevant in this company.

New track, ‘Don’t Look Back’, playfully pumped up to a vertiginous hook by Erix’s soaring falsetto, sounds suspended in sweet tasting 80’s aspic. ‘Our Love’ maintains the momentum, surfing the tide of 80’s feelgood emotions on a raft of keyboards, climaxing in a memorably melodic chorus via a questionable lyric that is gloriously resolved.

If anything, the two closing tracks, ‘Downtown’ and ‘Standing On The Moon’ further emphasise the band’s approach. Somehow, by staying true to the original eighties’ aesthetic, Houston make today’s melodic rock sound like a great step forward. And magically, will make any dislocated AOR fan feel closer to home. 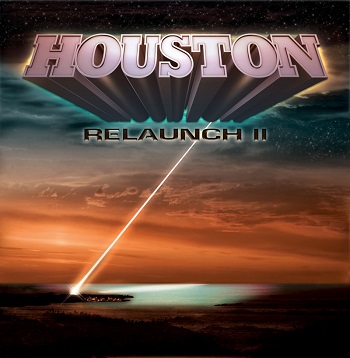