Popular and always busy melodic rockers House Of Lords have unleashed their ninth studio album, Precious Metal. The ever-reliable mark II version of the band is all present and correct again so joining front man James Christian is of course Guitarist Jimi Bell, Bassist Chris McCarvil and Drummer BJ Zampa – all of whom have input into the current House Of Lords sound under the leadership of Christian.

I love House Of Lords, always have always will, but with their last album Big Money, my interest in them waned a little bit, not that it was a bad album, far from it but it was all a little too predictable. It was obvious they had created an album purposefully that was familiar, sticking to tried-and-true House Of Lords traits and basically giving their fans more of what they want. So it got rave reviews and positive feedback from fans, but it felt a little bit pedestrian to me and saw the band going through the motions.

Now with Precious Metal they have come out with an altogether different beast and a major effort has been put into to shaking up their sound and style. Fresh is the optimum word to describe the song writing, they have maintained the epic ballsy rock ‘n roll swagger that we know them for but with a refreshed approach that shakes the album up and there is a hefty dose of non-stereotypical House Of Lords songs in the mix that gives Precious Metal more contrast and a greater depth. They have gone for a less polished sound this time around and the raw guitar tone creates an interesting vibe when intertwined with the pompous and lush keyboards, and it really works well. I think this new album will reignite many fan’s passion for the band. They’ve come back with a monster with no restrictions on the direction of the songs trying to keep their established fans happy.

I have to say the guys haven’t shied away from some ‘pop’ style sensibilities in their song writing and it makes these songs undeniably infectious with hooks flying at you thick and fast. It’s full of huge lush melodies, crunching guitar riffs, powerful vocals and at no time does it pull its punches from enveloping you in its grandiose atmospherics and raw rocking edge. Christian easily delivers one of his strongest vocal performances his voice giving a sweeping epic grandeur to the entire album with his booming commanding style.

I fell in love with this album hard and fast and it’s spiced up approach got my musical juices pumping. Precious Metal is easily one of the best House Of Lords albums ever. If you don’t love it from the first spin you never will. Without doubt an essential listen for all true melodic rockers! 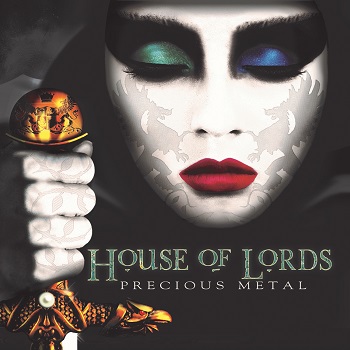