Truly a coup for Rock Candy Records. If you ever think about (and I’m sure you do) buying one or two lower profile Rock Candy Remasters, let it be these. Lauded by both Dave Reynolds and Derek Oliver as the epitome of craft and quality in Rock, Pop and AOR, both Hotel albums have just been reissued in remastered form. Both furnished with the now standard deluxe packaging, colourful photo gallery and extensive liner notes.

This was a band who had trodden the boards and worked the clubs in their native Alabama through the seventies, writing their own material, sweating the details, fine tuning their sound until eventually “getting a deal” with Mercury Records in 1977.

Thanks to the solid work done in the preceding years, the self titled debut (1978) seemed to pop out the studio womb like a fully formed citizen of the musical world. Knowing and urbane, making musically oblique references to the class acts of the day like Steely Dan (Another Think Coming, Right On Time), Hall&Oates (Not Wise To Say) and Air Supply (Hold On toThe Night), though there’s a bit of Eric Carmen in there too.

What’s most striking about it though, aside from the high calibre song writing, the performances and Dain Eric’s imaginative, 3D production, is its stylistic variety. Vocalist and pianist, Marc Philips had a powerfully distinctive, commercially attractive voice, and each track seems to reflect a different shade of Philip’s style. What the band and producer clearly had in common was the remorseless pursuit of that awesome emotional moment, where pop, rock or whatever you want to call it, transcends its genre limitations. ‘Losing My Mind’s keyboard, synth brass and acoustic guitar arrangement flies right past you like a thief in the night, stealing your emotions as it goes, and Philips’ mournfully soulful vocal on ‘Old Silver’, is raised up by prancing, dancing strings on a magically orchestrated middle eight. But you could have picked any two of these ten tracks, all examples of what you can achieve through the composition of fresh sounding melodies and universal messages, then framing them in thoughtful, inventive arrangements.

It was truly an impressive debut.

The band moved to MCA and recorded and released Half Moon Silver in 1980. An album that took big, bold strides in an AOR direction. 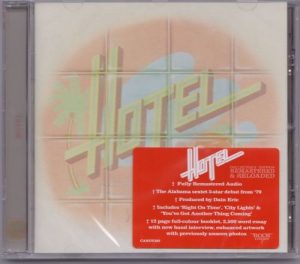