First on the triple bill nostalgia fest, surprisingly, are Alien Ant Farm who took on that tricky opening slot. However the band needn’t have worried as nu metal fans from the noughties heavily descended upon Rock City as soon as the doors opened. The early start time of 6.30 did not hinder fans from throwing themselves into rocking out, singing with whole hearted passion for the lyrics to  ‘Movies’, ‘Courage’ and ‘Wish’.

Long standing lead singer Dryden Mitchell engaged the audience in talks about MTV, quirky tales of band anecdotes, thanking the crowd for their support  and sneaking in a plug about new album Always And Forever. He even jokingly dedicated track ‘Attitude’ to his drunk mother. The majority of the set list is pulled from the 2001 heyday album, ANThology, which delights the crowd, especially the finishing pièce de résistance, Michael Jackson cover, ‘Smooth Criminal’ which brought A.A.F to the attention of the masses at the start of the millennium.

P.O.D (Payable On Death) storm the stage, armed with enough energy to match a Tasmanian devil caught in a blizzard, leading a frenzied crowd to descend into formation creating the first mosh pits of the night. Lead vocalist Sonny Sandoval reacts by disappearing into the baying crowd to the complete dismay of the security team. In comparison, bassist Traa Daniels stands with a cool demeanour in a serene trance, undisturbed yet completely absorbed in the music. Tracks ‘Roots In The Stereo’, ‘Lost In Forever’ and ‘Panic And Run’ display the bands ability to successfully splice genres of reggae, metal and ska while keeping momentum and the crowd’s attention. The band dedicate ‘This One Goes Out To You’ to all the fans, followed by ‘Will You’ and ‘Set It Off’.

Predictably the stand out track for me and the adoring crowd is the anti violence anthem ‘Youth Of A Nation’; lyrically simple yet powerful in meaning. There’s no time to slack as the band take it up a notch again for ‘Revolution’, ‘Southtown’ and closing their performance with ‘Alive’.

Topping off the nights proceedings, were Hoobastank, opening the set with ‘Crawling In The Dark’, there seemed to be minor mic issues resulting in low volume on the vocal at times through the track although the singing crowd didn’t seem to notice. The hoob front man Doug Robb announced the band had an absence of almost a decade from the fair city of Nottingham. The set list was quite evenly taken from their self titled album; ‘Every Man For Himself’, ‘The Reason’ and ‘Fight Or Flight’. All the while Doug Robb grinned like a Cheshire cat as he was performing. His voice is exceptionally versatile, hitting the high notes with ease. The most surreal moment of the night was seeing the previously intense moshers switch to a hugging embrace as the starting chords of ‘The Reason’ began to sound. The sing along classic is shockingly over a decade old but its heart felt words are still quite poignant.

All the acts tonight have shown a genuine appreciation for the fans. Admirably, all three have had success with tracks which they have refused to let define them, building on the success rather than trying to imitate it, taking their music and adding twists or letting it mature into something in a different direction. Its always nice to hear new material along with the classics and tonight the fans have left happy after a glimpse of memory lane at an undeniable value for money package.

See more of Sean’s photos from the gig here 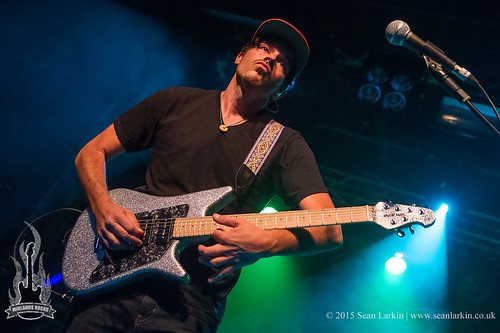