Genres of music can be broad churches, home to a great deal of variety. To a non rock fan, Sabbath might sound exactly like Orange Goblin, but we enlightened folk know that there is a galaxy of influence and variety between them. Bands at opposite ends of genres can have vastly different sounds and goals. But then there are bands who cruise right down the centre lane of a genre, sounding precisely how a band on that particular road should sound. No curveballs are thrown, no blueprints are being torched. They don’t want to be iconoclasts, they’re just happy to do what is expected, and hey, that’s no bad thing. Hollow Leg are such a band.

Originally a duo, now a four-piece, and hailing from Florida, Hollow Leg have been churning out Southern fuzz doom stuff for some time now and he we are at Crown – album numero tres. Opening track ‘Seaquest’ sets the scene for anyone not familiar with the band. Mid-pace stoner fare with a British metallic edge. Big riffery and filthy distorted bass are all present and correct. Maybe it’s just the sea faring title but ‘Leviathan’-era Mastodon springs to mind – although without the mind-boggling complexity – this just locks into a groove. Vocalist Tim Creter roars indecipherably above the storm, he’s clearly pissed off about something.

And from here on in it’s heads down for the rest of the album. ‘Coils’ is more traditionally doomier, the band all kicking in to a meaty groove. ‘The Serpent In The Ice’ zones out briefly after an FX laden solo before a new bigger, sludgier riff storm rolls in atop the Anselmo style gravel-throated howls. ‘Atra’ offers a brief instrumental interlude. Dusty acoustics, handclaps and wibbly electric flourishes affording us a much needed dose of variety.

Then it’s back to the sturm und drang. The same groove is maintained. Sometimes this can work, the cumulative effect can be crushing, punishing, overwhelming. Here though, despite the songs being good, it just feels a bit repetitive and flat. They do, however, save the best till last. ‘New Cult’ booms into life, leading into an almost post rock soundscape – building and releasing steadily.

So, a solid, workmanlike album. Good riffs, great musicianship, no duff tracks or failed experiments. But no reaching for the sky either, it’s just a bit lifeless. Samey. It’s a doom/stoner album – full stop. It’s production, to these ears, is a tad too polished for this style of music. It’s clean and unified, all rough edges have been smoothed. There’s nothing at all wrong with Crown, you should give it a listen. It’s just that you’ll have heard it all before, quite a lot. Cautiously recommended. 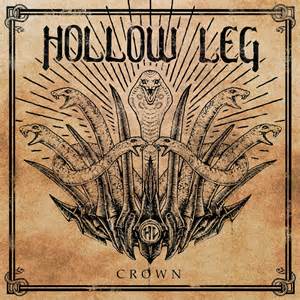