High Treason are one of the UK’s most famous unknown rock bands. Their story is the stuff of movies. They are the band for whom the line “some people think it’s all over” was written. You can find the fascinating story of band members dying, others leaving on the cusp of success, of a career resurrected by a now defunct Japanese metal band, and so on, if you care to do a little bit of online research. It’s been well documented.

The response to the release in April of their third (in 12 years) album, Silver Bullets, has been so positive that the label, 3MS (which has its own story for another time), made the decision to reissue it in August as a limited edition vinyl version. Only 500 have been pressed… the opposite of “stack ’em high, sell ’em cheap”.

Silver Bullets … as any reviews at the time will have told you … is very NWOBHM. In fact it’s unashamedly, incontrovertibly NWOBHM. And proud, obviously.

What’s different on on this vinylised version?

Same track listing, same running order, but the best stuff is brighter, warmer. Cliches perhaps, but probably the one thing that undermined the CD version was the cold edge of digital recording. The NWOBHM trademarks – a raucous twin guitar wallop and a gothic undercurrent – were neutered by flat compression, even making some meaty riffs sound tame. But here, they’ve been opened up… fully analogue, fully lossless, not particularly technical, but the music sounds great.

Top tracks like ‘Ride Into The Storm’ (now there’s an original lyric) and ‘Day I Return’, channel the visceral, guitar driven melodic hard rock of Thin Lizzie and Whitesnake, circa John Sykes. They come alive, enjoying their hi-fi freedom. ‘One Way Life’ and ‘Spanish Eyes’ are vital, vintage but maybe lack invention.

The stomp inducing twin guitar of ‘Temptation’ and a strutting chorus give this song a bluesy abrasiveness…vocalist Peter Yeomans’ convincing, confident vocals are a perfect fit. It’s probably the album’s standout track on an album that needs at least one more outstanding song to make it a real winner.

So, if you go for it, go for the vinyl version. 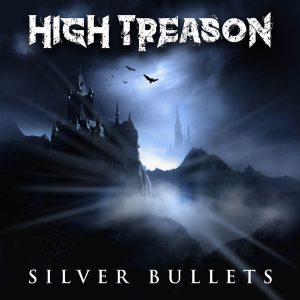