Only in the wonderful world of rock could a beast as hairy, dirty, noisy and downright pissed off as High On Fire be in any danger of becoming an institution. But here we are at album no.7 and, believe it or not, 17 years as purveyors of the finest metal, sludge, doom and all things in between. Luminiferous is also the first High On Fire album written and recorded by a dry Matt Pike. So, has sobriety mellowed the bands main man? Are we about to be treated to a clutch of songs celebrating a new clarity and sense of gentle introspection? A newfound love, perhaps, of the world and its inhabitants, it’s pretty flowers and fluffy ickle creatures? Are we fuck!

Strap yourselves in because here comes ‘The Black Plot’ – sludgy but way too fast to be doom! There are shades of Motorhead to this sonic assault, the bands vintage instruments being pushed towards the brink of distortion, while Watt roars away at the epicentre of this thrash fuzz tornado. It stops dead for a moment before a freight train of a solo leads us into a punishing finish.

There are occasional trips into very heavy psychedelia – ‘The Sunless Years’ should be the soundtrack to any future Hammer Horror reboots, while ‘The Falconist’ is the best thing Hawkwind never wrote! ‘The Cave’ even has an acoustic guitar in there somewhere a is probably the most mature 8 minutes of oppressive swirling stormclouds of distortion that the band have ever recorded.

‘Dark Side Of The Compass’ meanwhile, is something else – an intense, imposing aural battering ram. The sonic equivalent of being locked in a small room with a coke-addled, gun weilding Oliver Stone while he explains all of his conspiracy theories. The echoey solo sounding like something David Gilmour might create after some very bad things indeed have happened to him.

Watt has a serious bee in his bonnet here (he wears a bonnet?) about, amongst other things, the Illuminati, reptiles, aliens and other theories that would make even David Icke raise an eyebrow. Like one of those scary street preachers who rants to the heavens, it’s hard to tell quite what it is exactly he’s on about but easy to tell that he’s righteously pissed off. His guitar is his placard and he’s beating us about the head with it!

Like Mastodon without the pretty prog flourishes, this is a fearsome racket. A chugging, droning, thrashing industrial sludge metal doom thang. Honestly, you not want to make eye contact with some of these ‘amps-to-11’ psychopaths! …and breathe! They’re fading – roaring off into the distance like a thing possessed. We’ve escaped unscathed, they’ve found someone else to howl at and intimidate. But who knows, perhaps that bug-eyed loon knows something; you’d better give it a listen. Just don’t blame me when it eats all your food, smashes your furniture and pisses on your rug. 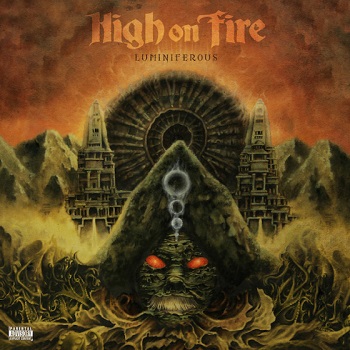