Chicago-based duo Hide’s electronic assault is a combination of heavy, industrial, dark-wave, goth electronics and lyrical themes of human rights and the power dynamics of society in the modern day. Nope, this isn’t meant to be an easy listen at all. And not once across the ten tracks do Hide give us respite. Even track six, which, as a matter of coincidence, probably, is called ‘Respite’, offers very little in the way of breathing space. Like their previous releases (to which you can listen here), Hell is Here is a haunting and daunting experience where every beat, every line, every word is laced with a penetratingly corrosive quality. Nope, this is no easy listen.

Together since 2014, fine artist Heather Gabel and percussionist Seth Sher create sample-based compositions using a combination of self-sourced field recordings and various pop culture/media, and their subject matter has long been the stuff that we are encouraged to ignore or are discouraged from discussing or is kept from us completely. While their 2016 EP Black Flamewas dedicated to the memory of Reyhana Jabbari, a 27-year-old Iranian woman who was hung for allegedly killing someone who tried to rape her, and deals with various human rights violations in Iran, the duo’s 2017 debut album Castration Anxiety addresses issues of power dynamics and representation. And Hell is Here is another hefty piece of work that shoves the shit of the world right into the listener’s ears.

Opener ‘Chainsaw’ tackles rape culture head on by taking the slew of verbal assaults that the duo – often while in the company of a child – have repeatedly received on the streets: “Hey baby! Are you deaf? Are you too good for me? Bitch! Fuck you then!”. And as if the aural experience isn’t enough to twist your innards, the video (above), intercuts images of a child and her mother with stills of victims of rape and murder. An acidic and acerbic opener comprised of a distorted synth line accompanying Gabel’s aggressive vocal, it’s as seething and disturbing as it is painful and poignant and sets the tone for the whole album. And that tone is ugly. Very ugly.

With its inhuman and animalistic sounds, while ‘999’ continues the theme of objectification, dragging along the animalistic nature of humanity expressed in ‘Chainsaw’, ‘SSSD’ (“Self Self Self Destruct”) calls for total destruction of the ego and the societal structures that imprison us and make the worst shapes of our being. The beating continues with the punishing beats of ‘Everyone’s Dead’, a brutal and callous track that leaves us twitching – just – in ‘Hell’. “Hell is here” comes the refrain. And at this point, there is no escape. The only way out is through and following ‘Respite’, the merciless self-cleansing continues throughout the mystifying and heartless ‘1/2 Trash’, the unforgivingly mangled ‘Grief’, the disorientating ‘Pain’ – the cold scream of the “Real dead bodies!” line sending a shiver down the spine – and into the unsettling closer ‘Raw Dream’, an anthem for the disenfranchised’s rising up, a long overdue and joyous recalibration of an imbalance of power.

Musically, Gabel and Sher are at their destructive and purgative best. Their previous releases demonstrate a band constantly evolving, refining and sharpening their sound, exploring, exploding and exploiting the darkest and heaviest sounds they can muster to create a phenomenal and crushing experience. Traumatic and cathartic, like their previous releases, Hell Is Here is an immersive experience, one that, should you try to resist, responds by pulling the listener deeper inside. Pain, anxiety, discomfort – the very lived experience of the individual in an increasingly absurd existence is captured between the abrasive and the cold synth sounds, the dense beats, and the enraged and expressive vocals. Hide’s vision is one of “self-governing ideology”, attained through the painfully honest examination of “life’s darkest, and often undiscussed, crevices.”

This is far from an easy listen. It’s difficult, it’s jarring, it’s unendingly unsettling. To remain unaffected by this piece of work you would have to be dead. Not just from the neck up, but actually, physically, flat-line, ex-parrot dead. What’s particularly unnerving about Hell Is Hereis that with repeat plays, one doesn’t become desensitised to it at all. Quite the opposite. With each repeat, the album becomes sharper and harsher and colder, and yet it compels more and more listens. Hell is here. We make it so. Do yourself a favour and let the cleansing commence.

If you like this, you may also want to check out Lingua Ignota 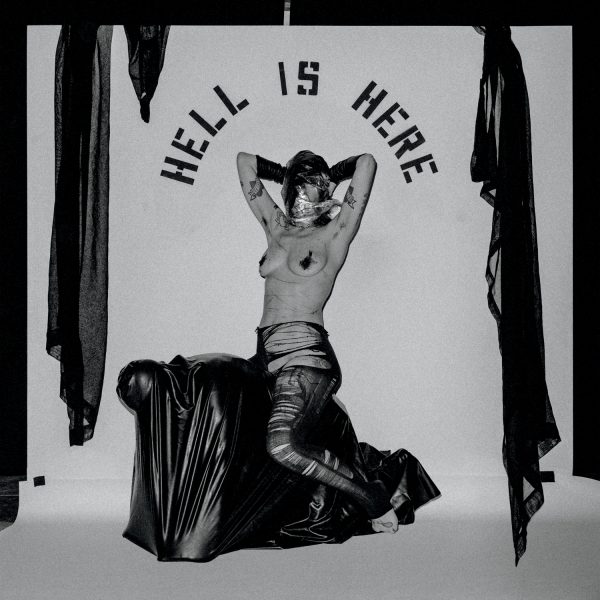