Poland has quickly become a hotbed of extreme metal with an amazing array of bands causing all sorts of musical mayhem and that’s primarily due to record label Godz Ov War. They’ve certainly got their finger on metal’s steely pulse and their latest acquisition, Warsaw’s Hexenalter, will only increase their standing. The band’s second EP, Bestial Damnation, is as raw and visceral as the title suggests and it is pushing blackened thrash into new, darker territory.

Originally formed as a one-man project by vocalist and bassist Marc Butcher (he recorded all the instruments on debut EP, Tormented Possession) Hexenalter became even more of an unwieldy beast when he was joined by drummer Instigator and guitarists Assassin and Witchfucker General. It was this line up which recorded Bestial Damnation and the chemistry they display is truly earth-shaking. However, on first hearing the brief ‘Intro’ you might think you’ve purchased an album of pipe music as a church organ sends choral notes sailing towards the heavens. Opener proper ‘Alter Of The Witches’ soon puts a stop to any feelings of serenity and makes for a rude awakening after the tranquil introduction. The sound created is dark and oppressive (though not unpleasant) and weaves a spell over the listener via a series of unearthly growls and ferocious blastbeats.

As their name suggests, there’s a strong Teutonic influence on Hexenalter and no more so than musically, with bands such as Destruction and Kreator having a definite influence. I can hear a lot of Pleasure To Kill in tracks such as ‘Desecration’ and Bestial Damnation is delivered with a similar rage. The production is a real boon; it hasn’t polished the band’s sound at all, yet it’s focused Hexenalter’s energies into a finely honed laser beam and they become all the more crushing as a result. Case in point being ‘Mortuary Sacrifice’, a track that’s akin to standing next to Hell’s furnace as shards of white hot sonics seer your flesh. At barely 10 minutes, some might bemoan the brevity of the four studio tracks, but the truth is Hexenalter have packed more into these four cuts than most bands put into an entire career.

In a strictly old school move, the physical version of this EP contains six live cuts (not listed on the sleeve) which were recorded at the Evil Madness II festival on 30th April 2022. I’ve always felt that the live environment was the Litmus Test for a metal band; it’s one thing to create a strong work in the studio with countless takes and various trickery, but it’s not so easy to recreate that passion live. The stage is what separates men from boys, and I’m pleased to report that Hexenalter come through with flying colours. Recorded around the same time as Bestial Damnation, these live tracks all come bookended with glorious feedback as Butcher’s vocals are suitably gruff while Instigator seems intent on pulverising his kit to dust. It’s a wild ride and one you won’t want to stop.

Bestial Damnation is a sure step from this young band and another one towards global recognition. 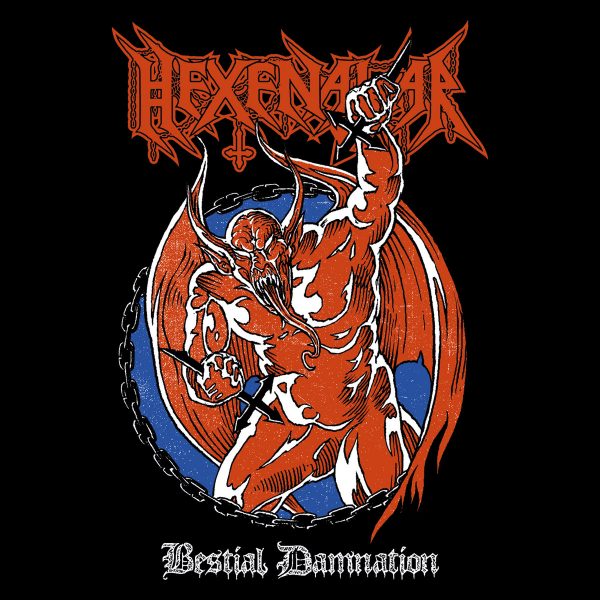