Paul Castles is crushed under the stampede kicked up by Henry Kane, whose debut album was released via Transcending Obscurity Records on February 20, 2017

You know sometimes you see those signs at the theme park about oversized people not permitted on certain rides. Or on a similar tack, in supermarkets when certain foodstuffs say not recommended for pregnant women. Well when the health warnings are being dished out better stick one on Den Förstörda Människans Rike. Perhaps it should read ‘not suitable for anyone with breathing difficulties’.

Because the one thing about this hostile 15-track debut album from Henry Kane (and no, we’re not talking about the Spurs striker!) is that coming up for air is really not in their armory. Instead what you get with these crushing Swedes is a constant barrage of ultra ballistic songs straight from the Napalm Death and Pig Destroyer book of grind greats.

Not that you would ever tell by listening to it but Henry Kane is actually a solo project in the shape of the multi-faceted Jonny Pettersson, many of you may know through Disfigured Victims, Skineater, Cavevomit or more probably Wombbath. 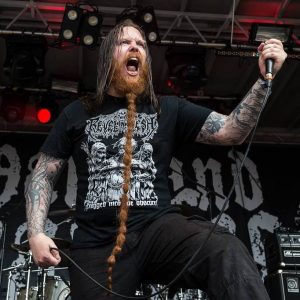 Nor do you have to be a master of mathematics to calculate that 15 songs in a  little over half-an-hour is, as they say, shifting it. In fact by the time you’ve peeled yourself up off the floor after being hit in the stomach by the initial body shots from Henry Kane you’ll be half way through it.

Each bombastic facemelter is a sonic slap that carries a sting that you’ll still be nursing when you wake up in the morning. It’s aural atrophy and your limbs will feel weaker than a newborn lamb if you go all 15 rounds with this most merciless of Swedish performers.

But what makes Henry Kane work is that within the vicious ballpit that they ignite with their ridiculous levels of feral fury is that there does lie a semblance of authority about their blitzkrieg blasts. Sure, it’s mad, crazy and riotous but it’s also brutally compelling, like a car crash you can’t help but gawp at.

Album title track ‘Den Förstörda Människans Rike’ offers a semblance of normality before the psychotic levels again soar upwards. To some it’s ballsout punk, others death metal on speed while the grind label also fits like a glove. To give it further definition, this album has a crust so thick you’ll need a pneumatic drill to break through the top layer.

Pettersson has an insatiable appetite for the downtrodden and the damned and his lusty love of everything putrid ensures that this work with Henry Kane will earn him plenty of new admirers.

As though he’s not got enough on his plate Pettersson has also just rocked up with Echelon’s Dave Ingram to form Ursinne, whose debut album will follow, also on Transcending Obscurity, later this year. 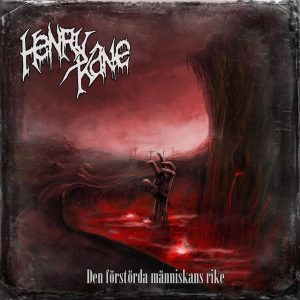