Ok, admittedly we’re not exactly in full-on Death Metal mode here, but if you like the above track, there’s a strong chance that you’ll love ‘A Ghost Inside’, the fourth full-length album from singer/songwriter/guitarist Henry Bateman.

‘Tis a thing of quiet beauty, this album. Delicate, fragile, as befits an album that deals, largely, with mental health and re-configuring ourselves in this post pandemic (for now) world we find ourselves in. About staggering gingerly back into the light, controlling our fears, remembering who we are and how to be ourselves again, minus “loungewear” and Zoom calls.

Bateman and his stellar young band rehearsed these songs for a good 18 months before recording, and man, does it ever show. Because as strong as these songs are (and they are) the performances all round are simply outstanding – subtle, forceful, intuitive, supportive and ready to rumble when they really need to.

So let’s jump right on in. Opening track, ‘I’m Worth More Than This’ eases into being on a sparse yet overdriven guitar strum – it’s calming, but with an edge. Hannah Lamb’s co vocals provide a haunting counterpoint to Bateman. The piano, here and throughout the album, is sublime and the song heads off on a Beatles-y mystery tour at the end. Very nice.

And so it continues. ‘Hung Us Out To Dry’ is gorgeous, you can hear preparatory breaths being taken during it’s gorgeous acoustic intro before piano and Hannah again join the fray – it’s an audio balm, is what it is. It becomes, at one point, slightly Radiohead-esque, a thing that happens more than once on this album, Bateman sharing a similar gently skewed sense of melody with Messrs Yorke and co. The bass work, too, is wonderful. It’s not quite Jazz, not quite Folk, but wholly lovely.

‘Something Over Me’ – which deals with coping with anxiety and panic attacks, sounds ironically big and brash, containing definite Fleetwood Mac, soft rock vibes and a stinging guitar solo while ‘In My Blood’ is a highlight in an album full of highlights. The repeated “in my blood” phrase becomes a chant, a mantra, a prayer, a suit of armour. The song gradually builds in emotion and force, almost imperceptably before Bateman’s guitar begins to buzz and howl.

The album just keeps getting better, each song topping the last, the dynamics throughout are masterful, switching from aching, echoing piano to Gilmour-esque guitar to melodic Crowded House style balladry. We end on the gentle, chill out feel of ‘You make Me Happy’, which suddenly, briefly heads off (again) into Beatles territory before building into a dirty, angular guitar solo, rocking slowly, menacingly before becoming more tuneful and ending, as we began, with piano…then guitar.

‘A Ghost Inside’ came as a somewhat unexpected joy. Having heard the ‘Seinfeld Street’ single back in March I was unsure, the jury was out but this has won me over. Writing, production and especially performance are all there in spades, the album has a wonderful organic, holistic feel. Grace and beauty, with just a touch of distortion.

Self released by Henry Bateman 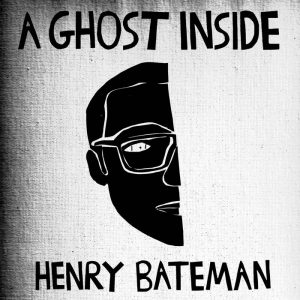