It’s that time again. MR’s Jason Guest once more submits himself to an ear-bashing with four new releases from Hells Headbangers:

Immediately tearing us away from this world and dragging us deep into the void, this six-track meditation on paranoia, perversion, madness, and all things negative is intense. Drenched in reverb and abounding in destruction, this is a knuckle-dragging, leaden-breathed, seething slab of tumultuous terror. Masses of feedback, frantic guitar noise, unremittingly savage riffs, chaotic and all-engulfing atmospheres, and maniacal vocals, one of the Black Twilight Circle collective, The Haunting Presence show no mercy. Resolute with razor-sharp riffs combined with layers of noise and vocal discharges, the tracks are tightly concentrated blackened bursts between eighty seconds and four minutes. Whether masturbatory self-indulgence or a stroke of genius, this is one to abandon oneself to time and again as with each listen, it becomes increasingly difficult to resist. 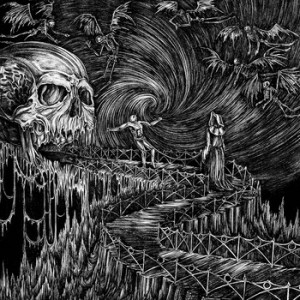 Three years ago, Norwegian death duo Gouge released their 7” debut Doomed to Death. Four tracks of slavering old-school death metal, it was buzzsaw riffs, battered drums, and blood-gargled vocals wrapped in gore and violence. 2015 and their first full length Beyond Death is upon us. More of the same? Yes, but the good kind.

Christoffer Bråthen’s larynx has been spared no suffering, his voice retaining the raw savagery heard on the debut and flooding his morbid lyrics with the gore that they demand. His guitar work has come a long way too, his riffs and cut-throat lead work more complex but still well-balanced with the needs of the songs. His bass lines largely follow the guitars and so, because they are as high in the mix as the guitars, they add weight to the tracks and work well with Herman Holer’s formidable stockpile of violent and focussed drumming. As for the song-writing, Gouge has nailed it. Though there are a few tracks where the riffs could easily be traded for those of another, there’s little that can be counted as filler as Gouge stick to their mission of concentrated carnage throughout. 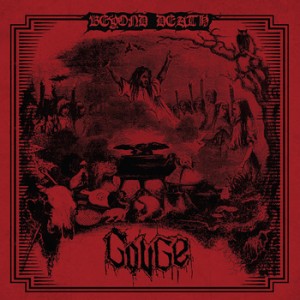 Born immediately after the demise of Angelcorpse in 2009, the first album by Greg Palubicki’s Perdition Temple comprised of material that would have been that band’s fifth album. With Palubicki handling guitar, vocals and bass and ex-Angelcorpse Terry Eleftheriou on drums, Edict of the Antichrist Elect, in retrospect (where everything is always so much clearer, yes?), is an album by a band between states and yet to find and/or define its identity. With Palubicki still at the band’s centre, 2015’s The Tempter’s Victorious is a much better album. Play these two albums back to back and it’s clear that the band on this album is what Palubicki’s post-Angelcorpse music needed all along to give life to his morbid visions.

With ex-Angelcorpse and current Immolation Bill Taylor joining on guitar to augment the band’s sound with his own menacing voice and match Palubicki in both the ferocity and creative departments, drummer Ron Parmer and bassist Gabriel Gozainy both step up to flesh out the low end with plenty of technical and musical might. As for Impurath, he is a much better vocalist than Palubicki, his throaty barbed growls bearing the ferocity demanded by the music. Add to the blackened ferocity top notch production where every instrument is sharp, cutting, and pummelling, it’s clear that the ghost of Angelcorpse has long since departed and Perdition Temple is now a band in its own right. Rather than Edict…, The Tempter’s Victorious could easily be considered Perdition Temple’s debut. Not without its flaws, if this is what the band is capable of, the future will be devastating. 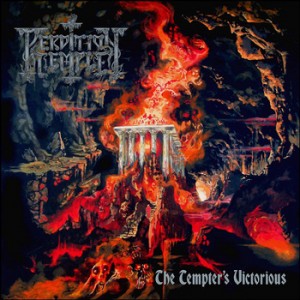 In the two years since their 2013 demo Primitive Age (re-released through HH in February this year) Bat’s Venom-inspired heavy metal hasn’t changed. Heavy metal riffs, a farting buzzsaw guitar sound, some impressive lead work, straight-ahead drumming, and Cronos impersonator Ryan Waste spewing deviance and debauchery, Cruel Discipline delivers two more (tongue-in-cheek?) tracks that give an indication of what to expect from their upcoming album: nothing special but fun nonetheless. 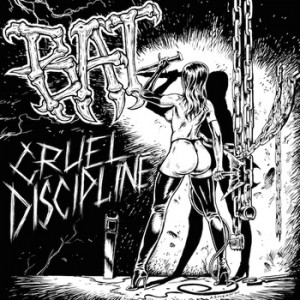