A Pole, a German and an Austrian walk into a recording studio . . .

Reviewed by Brian McGowan and released by Ear Music 16 February 2018.

Heard this one? A Pole, a German and an Austrian walk into a recording studio. Smart PR. Chopin, Beethoven and Mozart. A neat, tongue in cheek conceit. The point is made, and your heightened expectations gladly engage with this album of “classically inspired metal”, listening out for those motifs lifted from the Classics and embedded in the songs.

On their second album now, Heavatar was conceived as a side project by guitarist/ vocalist/ producer, Stefan Schmidt, as a natural progression from his very successful, six album, acappella classical rock band, Van Canto.

And there’s much more than just a game of “spot the composer” at play here. Schmidt borrows heavily from Kai Hansen’s Gamma Ray MO – a simplification of Classical Music’s highly sophisticated form, with melodies, bass lines and chord progressions tightly controlled by spine tingling orchestration. The thrashy, escalating operatics of ‘None Shall Sleep’ (Nessun Dorma) and ‘A Look Inside’s sweeping majesty suggest that, like Hansen’s recordings, this simplification still allows for all the drama and theatre we can handle.

That said, occasionally Schmidt’s tight hold on events slips a little. ‘The Annihilation’ and ‘Battle Against All Hope’s foray into NDH territory would be welcome, except that they push too far, and end up in a heavy metal wilderness, so densely constructed it is almost impenetrable. Still, the catchy, power metal theatre of ‘Into Doom’ and ‘Hijacked By A Unicorn’, punctuated by tight choral harmonies (courtesy of Hacky Hackman and Olaf Seinkbell) is fortunately on hand to guide us confidently out of the heavy metal maze.

‘Wake Up Now’ reveals a more mature lyrical narrative, reflecting on an alienated world, and ‘A Broken Taboo’s intensely confessional Jacque Brel like lyrics echo this approach, before breaking out into more familiar metal territory.

And, emphasising that the band’s music is no slave to convention, ‘The Awakening’ rattles and shakes to the rhythmic chatter of clacking Bodhran spoons and bones, set to the skirl of Celtic pipes, on a delightful Rock Opera lite duet between Schmidt and an unknown female vocalist.

No one in their right mind would seriously compare their own musical pieces to those of the composers of the Classics. But a few talented writers and performers – like Schmidt – can create an entertaining, heavy metal illusion that nods its head respectfully in the right direction. 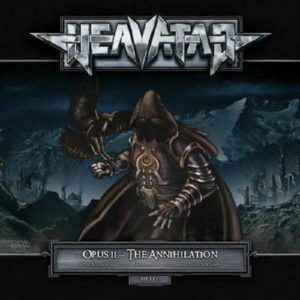