Heather Findlay, ex member of Mostly Autumn, the band that probably holds the world record for the most “ex members” ever, released a solo EP back in 2010, Phoenix Suite, then . . . nothing. Well, not exactly “nothing”… in fact probably the opposite of nothing. Since then she has contributed vocals to countless artists and albums both live and in studio (check this out on Wiki and be impressed). The notion is that after releasing the 2010 EP, she wrote an album’s worth of songs that were never recorded, because the time wasn’t right/she couldn’t get a deal/she was too busy.

Nine years later, the recently recorded album Wild White Horses has been released. It is a remarkably assured piece of work… a gracefully wrought acoustic album. But while there’s plenty of wistful candour, and she doesn’t overdo the sentimental bit, at times her voice, sometimes visceral, urgent, at others fragile, wisp-like, isn’t helped to find its place by producer Luke (Thunder) Morley’s technically brilliant but often unimaginative arrangements.

That said, the downbeat Americana of the Soul Asylum influenced ‘Here’s To You’ and the  minor chord drama of ‘The Island’ are perfectly framed, both gleaming with a touching vulnerability. And frustratingly, while ‘Forget The Rain’ and ‘Southern Shores’ hint at the magic and fire of Findlay’s session work, their awkward, jubilant sparkle is occasionally muddied by Morley’s layered arrangements.

No surprise then, that the standout tracks are the ones that dare to be different. ‘Face In The Sun’ is one. Its mix of strings, piano and chorale backing vocals leave us delightfully unprepared for the invocation of a popular (relatively speaking) Hindu Mantra, surrounded by a set of brooding, surrealistic lyrics that stretch pop conventions to breaking point.

‘I Remember’ is another. The Uilleann pipes give it atmosphere. The addition of a percussive Bodhran thump and the sweet strum of a mandolin add to its distinctive cinematic flavouring. And there’s ‘Cactus’. The swingtime styling and enigmatic lyrics make the track worth investigating . . . you can mine these lyrics for hours and still come up with a different conclusion every time.

So, as with most albums, not everything on Wild White Horses works, though the good stuff takes precedent. The nagging suspicion remains that Findlay’s versatility, and willingness to vary her stylistic approach, is as much a curse as a blessing. 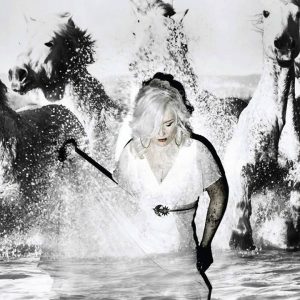