Released by EarMUSIC on 22 September 2017

A more mature, confident band have emerged from the studio, after a self imposed, eighteen month exile from recording. The titles of aggressively infectious tracks, ‘Bastard Of Society’ and ‘Shit City’ perhaps don’t portray this new found maturity, but lyrically, the songs are rooted in social commentary, informed by a sense of self awareness, even if they never truly reveal any startling insights.

That said, they are clearly now a band that’s willing to look over the edge occasionally. And jump. They could be safe in the knowledge that their musical talent and songwriting ability will parachute them down to solid ground. But more often than not, they take wing and fly.

‘Redefined’ gives us a first look at the new shape of things. It’s an exquisitely sculpted piece of contemporary pop/rock, embracing the chart friendly, cutting edge studio sounds of say, Stuart Price or Patrick Leonard. But it’s ‘Time On Our Side’ around which the album pivots. Proving that Heat and technology go together, Tobias Lindell’s arrangement and production are built electronically on the borrowed melodic structures of contemporary pop (as Max Martin might, or might not say). It’s an audacious move by a band known for their bright, brash AOR sound, and it works. It’s three dimensional, climactic, and it’s pulled along on a delicious melancholy undertow.

We are on the edge of our seats now, eager to hear what’s coming next, but fully expecting an anticlimax. Discovering that the second half of the album is a rock solid, rich seam of anthemic AOR and grandiose European operatic rock is truly a delight. Two tracks in particular standout. ‘Eye Of The Storm’ is ambitious, fluent, streamlined – jettisoning the ballast of bombast without demolishing that all important seed of innovation, like Edguy around the Rocket Ride time. ‘We Rule’, on the other hand, is as close to a ballad as we get here. The melody carries a sense of subdued drama as it marches from verse to bridge to chorus, pushed along by a rolling, clanking piano and pizzicato strings, reminding us of vocalist Erik Gronwells’ Queen connections. It’s tightly structured, fiercely melodic, and is packed with exciting dynamic shifts.

At times the sheer expansiveness of Into The Great Unknown is a bit overwhelming…its 44 minutes and 47 seconds can cause indigestion when taken in one huge bite. But broken down, it is close to perfect, and it carries a crackling current of energy that will electrify all who venture within. 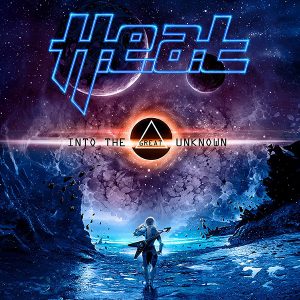