Gawd bless ’em. It’s safe to say that Hawkwind can now be classified as a national treasure and now they’ve gone and given us just what we wanted for Christmas. After a run of quality albums culminating in this years ‘Into The Woods’, we are treated to ‘At The Roundhouse’, a double live CD/DVD of last May’s triumphant return to London’s famous underground venue, some 40 years since the band last played there (supported by a certain young band called Motorhead) and 45 years since they recorded ‘Silver Machine’ at the very same venue.

It all starts in typically shambolic fashion, Dave Brock (now 75!!) rambling and threatening the crowd with “quiet acoustic music”…and that, for a 3 song mini set, is exactly what we get! And, remarkably, it works! coming on like a crusty Fairport Convention, the first 15 minutes sounds like it should be played in a field somewhere, with everyone sat around an open fire. A wonderful sense of community is evoked amid the acoustic guitars, tambourines and tree-hugging hippy dippyness.

And then we’re off. The guitars are plugged in, the cosmic, spacey keyboard effects commence and we blast off into a 12 minute ‘Born To Go’. Space rock engulfs us and the trippy drone gets increasingly heavy, man. The bass sounds immense and a free jazz sax joins the melee. Hawkwind doing what only Hawkwind can. Hopefully no one was booked to play the Roundhouse the next day ‘cos this sounded like it was never going to end.

And, of course, it wouldn’t be a Hawkwind gig without some pretentious spoken word utopian sci-fi poetry. But fear not, we quickly return to the incense-fuelled chugging – the likes of which hasn’t been in vogue since 1971, replete with a guitar solo that lasts for several days. In many ways Hawkwind are our Grateful Dead – long gigs, much chemically enhanced jamming, far out light shows and a faithful, ‘follow them ’til they stop moving’ fanbase. Brock is our Garcia, our Captain Trips.

‘Have You Seen Them’ takes us back to nature, man, and offers us “glimpses of the woodland kind”…and a riff that’s probably been going on since 1975. While one suspects Brock’s tongue may have been firmly planted in his cheek for the 9 minute, ‘Small Faces on ‘shrooms’ whimsy of ‘Vegan Lunch’.

And on it rambles, epic jams interspersed with brief, almost ambient, interludes, the mood being set in a way only this band can. The 11 plus minutes of ‘Synchronized Blue’ maintain a relentless pace, almost descending into chaos as the guitars and bleeps battle for the upper hand. ‘Into The Woods’ boasts a mammoth psyche riff that drags Hawkwind kicking, screaming, smoking and mumbling into the 21st Century. Songs from ‘Woods’ and previous album ‘The Machine Stops’ sit very well together…and last a very long time, the gig threatening to become a “be in”.

Finally (about a week later) we reach the encores. Phil Campbell joins the band to tear through the Beach Boys on acid cosmic rock of ‘Brainbox Pollution’ and a joyous, celebratory reading of the obligatory ‘Silver Machine’ – it’s psyche biker (psycher?) rock riff still defines the genre. It’s a glorious riff out finish and surely Lemmy is looking on, smiling approvingly.

What the fuck, man, it’s Hawkwind. It’s decades down the road, you’re either going to buy this or not. And if you are, if you’re a fan, it’s pure manna from heaven. Just don’t forget to drape scarves over your lamps and fire up…man. 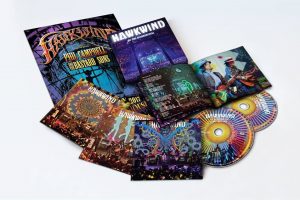