For those who don’t mind a somewhat earlier start to the day, there are plenty of musical gems to be found at an event like this, and so it was with Buffalo Summer opening the main stage at a quarter to two in the afternoon, and while it wasn’t the biggest of crowds to see them in action, they still gave us a fine set. They’ve been regulars at several festivals over the last few year, but this time they seemed to have a much harder edge than previously, and it suited them really well. The crowd did take a bit of waking up, but the band worked hard and eventually got a good response. It will be interesting to see how the band can move forward from here and hopefully move further up the bill (and later in the day) in the future. 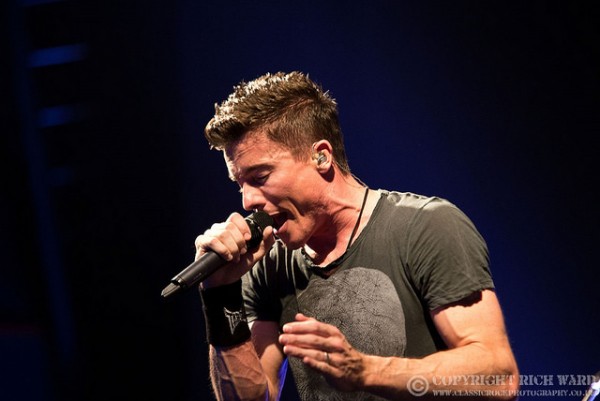 The changeovers at HRH are usually around 20-30 minutes, so it was a bit of a surprise that the schedule showed that it would be at least 45 minutes after Buffalo Summer before Toseland took the stage. Which gave us a chance to check out Swedish metal band Syron Vanes on stage 2. It’s worth mentioning that the HRH organisers have always shown a creditable commitment to including new and up and coming bands on their bills and this weekend was no exception, Indeed at this event, the Saturday on Stage 2 was actually named ‘HRH Rising Stars’ although the quality of the line up on the main stage, not to mention the tight schedule, limited the opportunities to check more of them out. I think it’s fair to say that Syron Vanes are somewhat influenced by Iron Maiden, and their fairly straight forward metal didn’t really have a lot to set it apart from a lot of other bands on the bill. It was listenable and competent, but not a lot more than that.

I think it’s natural that your average rock fan is a bit wary of people who’ve enjoyed great success in other fields suddenly deciding they want to be rock stars, but being fair to former World Superbike Champion James Toseland, he’s obviously a great rock fan and when he put his band Toseland together, he was clearly prepared to pay his dues, playing the circuit, and not asking for recognition just because of his name. It also helps that it’s a pretty decent band backing him up, and he’s got some fair songs to deliver. Opening with ‘Puppet On A Chain’, the band delivered with a fair amount of energy, and apart from a section where Toseland himself played piano, the levels were kept up for the entire set. ‘Singer In A Band’ has the potential to be a bit of an anthem, and I was a little surprised to see it so early in the set, but the rest of the set was nearly as good. The band have just announced they’ve signed a deal with the hugely influential European melodic rock label Frontiers (home of Journey, Whitesnake and Asia, among many others) so the future is looking pretty bright. Catch then while you can.

The Von Hertzen Brothers must be fairly unique as a band who got to play both Hard Rock Hell and HRH Prog in consecutive weeks, but it’s tribute to the band’s versatility and imagination that their sound is very difficult to file in a single slot, with elements of rock and metal, with a bit of the pomp and epic sweep of band’s like Queen and Muse. Having seen their astounding set at Nottingham’s Rescue Rooms the week before I knew what to expect, but those unfamiliar with the Finnish band were clearly taken aback by the sheer power and energy on stage. It takes some nerve to begin a festival set with the twelve minute title track of a brand new album, ‘War Is Over’, but this band have never let such things deter them, and when they followed that with the insanely catchy ‘The Arsonist’, a veritable earworm of a song, then threw in ‘Coming Home’, a song which is almost impossible to listen to and keep still at the same time, there was no stopping them. The musicianship is terrific and the energy of the band just sweeps you up and carries you along. ‘Flowers and Rust’ gave us another high point, and as if to prove they do things their own way, they ended with the 9 minute closer from the new album, the equally anthemic ‘Beyond the Storm’. Considering this was quite the start of the tour in support of the new album, the band were amazingly tight, and even if most of the crowd weren’t familiar with band, the applause at the end was long and loud, even if guitarist Kie had to be brought back on stage to acknowledge it. A special set from a special band.

Following the Von Hertzens would have been a serious task for most bands, but Gun certainly gave it a good try. Another band with a new album to promote, there was plenty of new material in the set, including the opener ‘She Knows’, and it was interesting that the band didn’t keep some of their better known songs, including ‘Better Days’ and their cover of cameo’s ‘Word Up’ for the big finish, but again spread them through the set rather than give the crowd too much of the new in one go. Compared to the Finns, Gun aren’t the most visual of bands, but you can’t argue with the quality of their songs. ‘Steal Your Fire’, along with ‘Better Days’ are songs good enough for any occasion, but it was a little bit disappointing that they chose to end with another cover, the Beastie Boys ‘Fight For Your Right To Party’. Yes it got the crowd roused and singing along, which is what it’s all about, after all, but I wanted to hear Gun, a quality band with good songs. Nevertheless, they’re always a band worth hearing.

Reef seemed a bit of an odd choice for a festival going by the name of ‘Hard Rock Hell’, even with a new song entitled ‘Precious Metal’ in their set list. Nothing to do with the quality of their music, just that they haven’t ever seemed to be included in the rock or metal scene, for some reason. That’s not to say there weren’t a lot of people in the Main Hall crowd who were pleased to see them, some of their better known songs, like ‘Place Your Hands’ and ‘Naked’ got big cheers of recognition, and they had a lot of the crowd clapping along and singing. Musically though, while there was nothing wrong in itself, it all seemed a little one paced and flat, especially after the energy of the Von Hertzens and the attitude of Gun. While singer Gary Stringer roamed around the stage and tried to work the crowd, the rest of the band seemed pretty anonymous, and I do think they miss guitarist Kenwyn House, now with Goldray. His replacement, Jesse Wood (son of Ronnie, no less), is a very capable player, but did little apart from stand and play. I wrote ‘OK overall’ in my notebook, but to be frank, a band in this slot on a festival bill needs to be a lot more than ‘OK’.

As far as the Main Stage was concerned, it was down to the Black Star Riders to close the bill, and as the hall filled up, although not to the extent of the previous night, there was a genuine sense of occasion, and the band responded with a proper headlining set, nearly two hours long. Their current touring is to promote their new album, Heavy Fire, so there were obviously several tracks from the record, mostly in the first half of the set, but, as with their show at the Slade Rooms in Wolverhampton, in the early days of the tour, it’s clear that the band are trying to give themselves a distinct identity, rather than as an offshoot of Thin Lizzy, and, as in that show, the Lizzy songs were cut down to a bare minimum, with only ‘Jailbreak’and set closer ‘Whiskey In the Jar in this set. That’s not to say that the band’s own songs don’t have that Lizzy swagger, though. ‘Dancing With The Wrong Girl’, a typical Lizzy song title if ever there was one, ‘Bound For Glory’ and ‘Hey Judas’ among others, all have the touch. While it’s always great to see Scott Gorham play, I have to say that Damon Johnson had a terrific gig on the night, his work seeming to have an extra bit of attitude driving the band along. Overall, this was a great set to finish the weekend on, although personally I could live without hearing ‘Whiskey In The Jar’ again, and can’t help wondering how good ‘Emerald’ would sound with this line up, but judging by the singalong, almost everyone else in the room loved to hear it again. A fine, fine way to finish the weekend.

So that was Hard Rock Hell XI, Friday night’s problems with overcrowding aside, it was a pretty good way to spend the weekend. There was some great music,  some good new bands to look into, and the HRH brand itself seems to go from strength to strength. Some of next year’s line up has already been announced, with Saxon, the Dead Daisies, Phil Campbell’s Bastard Sons and Girlschool set to play Hard Rock Hell XII in November 2018, and plenty more names to be announced, as well as the other HRH events round the country. Tickets are on sale now, see the link below.

Read our review from Day 1 here