Great AOR is an adrenaline rush that raises the hairs on the back of your neck, gives you goose-pimples on your arms, ups your heart-rate, plays with your emotions. Most AOR/Melodic Rock albums today don’t do that. Some get close, some very close, like H.E.A.T.’s first album, with Kenny Lekremo on vocals. Our breath was bated – a band to lead the resurgence perhaps? Unfortunately, the law of inflated expectations and diminishing returns blighted subsequent releases, Address The Nation and Freedom Rock. Occasionally brilliant, but unsatisfying albums, both made for today’s tech. Download a handful of classy tracks, ignore the others. Now, 6 years after the debut comes Tearing Down The Walls, emphatically fulfilling the promise of that first album.

‘A Shot At Redemption’, from the EP that trailed the full album, is an absolute peach of a track, showing up a more confident, more elaborate approach from the band and producer, Tobias Lindell. It’s a clarion call that leads to a brilliantly grandiose chorus, full of itchy rhythmic crunch. Successive cuts, ’Inferno’ and ’Tearing Down The Walls’ lack that track’s insidious verse, the first opting for the glitzy, glammy route, the other showing a flinty edge of defiance, but both erupt in hooky crescendos, equally memorable.

Expansive standout cut, ‘Mannequin Show’ takes slices of neo-classical prog, symphonic rock and Top Forty pop and, punctuated by pizzicato strings, brings them together in an impressively cohesive whole. It’s unashamedly overblown and pompous and that’s the secret… in one jaw-droppingly dramatic swoop, it cuts against the grain of the previous five tracks, catching us totally by surprise, and we love it.

‘We Will Never Die’ takes a long clear look in the rear view mirror, sands down some of the earlier stuff’s sharp corners and settles for genre convention. It’s not about the theory or the formula here, this one’s about executing with skill and taste. Again proving the band are superb musicians as well as gifted songwriters. And so it goes on.

Sweden has been the lightning rod for melodic rock since the nineties, giving us aspiring band after aspiring band. Many will match H.E.A.T.’s ambition, but judging by this, few will match their talent, even less the quality of their music. 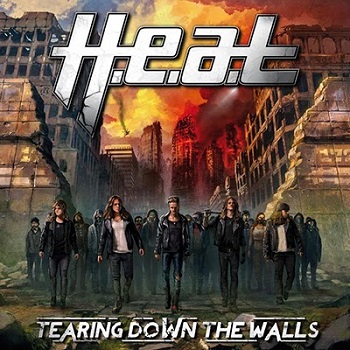