It’s an incredible thing when you realise that Voivod have been at it since 1982. 14 albums, 5 EPs, countless singles, a few compilations – this band have been far from idle. What is perplexing is why this band isn’t much bigger than they are. Fusing thrash, punk, jazz, prog rock and sci-fi themes, Voivod’s sound is broader than most bands, and much more captivating. But tonight, in KK’s Steel Mill, they get a big turnout, one that holds their innovative and challenging music in high esteem.

Opener ‘Post Society’ showcases what defines this band: up-tempo complex riffs, atmospheric atonal guitar lines, music-breaking lead lines, thundering bass lines, tight, sophisticated drum patterns, and a vocal that sits somewhere between the melodic, the jagged, and the jaded. The newer material in tonight’s set – ‘Obsolete Beings’, ‘Orb Confusion’ – sits well alongside the older material – 1988’s ‘Psychic Vacuum’, 1989’s ‘The Unknown Knows’, and the band’s eponymous track from their 1984 debut. And the crowd are into it, with more than a few singing word for word and punching the air in time with every off-beat percussive stab.

As for the band’s energised performance, they make it all look so effortless. Chewy has long established himself a more-than-worthy band member since the sad passing of band founder, Piggy. The same goes for bassist Rocky, with the band since 2014, putting everything he’s got into pounding out some seriously heavy bass lines. And drummer Away is amazing to watch, his beats shifting with the dynamics of the songs and driving them all forward with an immeasurable force. Voivod are an incredible band with an incredible sound and to witness them at such proximity is nothing less than a remarkable experience.

“It’s good to be back in the city of bad food and ugly women!” A pleasant start to the evening’s barrage of tongue-very-much-in-cheek cartoon-esque violence and repulsive ridiculousness. With an overblown Alice-Cooper-shock-meets-WWE-hyperbole between-song performance/pantomime stretched far beyond the point of seriousness, Gwar punish the crowd with filth-ridden heavy metal blasts and thrashy thrashing thrash riffs topped with many a toxic and mangled lead break pummelled to bits with hefty tub-thumping drum beatings one song after another.

The Berserker Blothar has settled in to the role of vocalist that Oderus Ungerus left gaping, both his mighty horns and twin peepees expressing his obvious excitement. Guitarist Bälsäc The Jaws ‘O Death brings the grind and the widdly widdle to squeeze out raging riffs and toenail cutting solos. Bassist Beefcake the Mighty thunders and farts long in the low end, spewing out the occasional grunting vocal. Drummer Jizmak the Gusha beats things. Very hard. Very loud. And very well. To a bloody pulp. And body guard Bonesnapper does all he can to defend the band against their nemesis, SawBorg Destructo. It’s an epic battle.

And everything is huge! ‘GWAR’ in huge lettering on either side of the band and on the huge backdrop. Huge costumes with huge helmets, huge bellies, and huge pointy bits – horns and winkies. And huge heavy metal songs made of a metal so heavy it could only be lifted from then floor on the moon. From start to finish, tonight’s gig is a vulgar display of extravagant, excessive, loud, flamboyant, overblown, showy, flashy, over-the-top-ness. A non-stop slasher spectacle, it’s grotesquery in abundance, from all things exaggerated to all things in very bad taste. Except for the bit where Donald Trump got ripped to shreds. I do feel for those left to mop the floor after all that squirting… 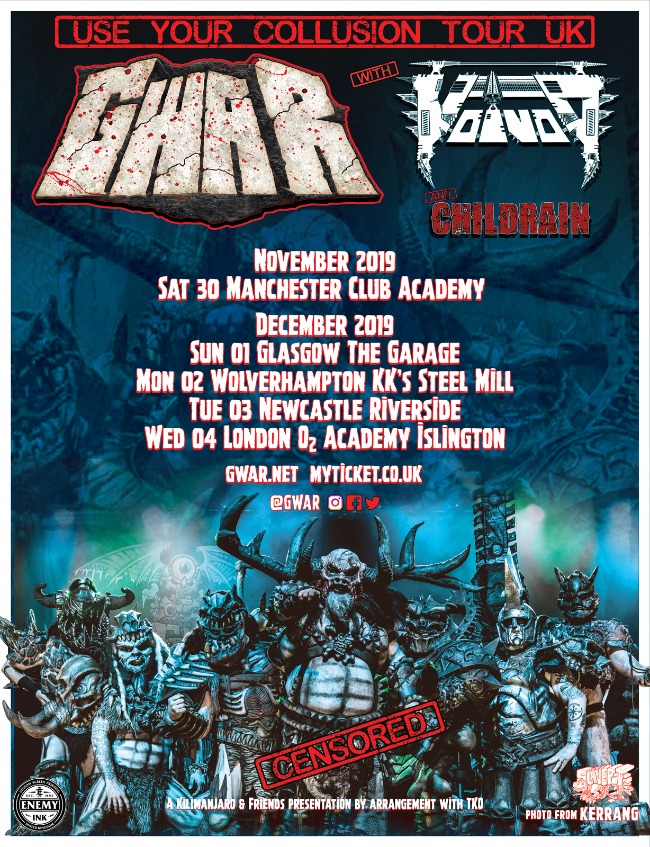