A solid offering, but not much more than that…

Gus G (or Konstantinos Karamitroudis to give him his proper name – although I’m sticking to Gus G to save my poor keyboard) has been around for a very long time. Firewind, Dream Evil, and Ozzy Osbourne arguably form the core of how most people will know him, but this is actually his third solo album. I actually reviewed his last one Brand New Revolution on here back in 2015 and enjoyed it, so I was looking forward to more of the same from the furious-fretting guitarist.

This time around, though, things have moved on somewhat. Rather than a cavalcade of guests, we’ve got an established 3-piece band, filled out by Dennis Ward on vocals and bass and Will Hunt (who you may know from Evanescence) on drums. As a result, there’s a more consistent sound overall throughout the album, even though the variation on each song is at times quite severe.

Firstly, let me get the obvious out of the way: Gus G is, first and foremost, a technical wizard on the guitar. While he can throw down evil riffs with the best of them, his ability is right up there with the guitar greats of all time. Shredding isn’t so much his cup of tea as it is his entire meal – every track contains evidence of his capability and it’s so ridiculously clean and full of feel at the same time that I would defy any guitar player not to be impressed listening to it. Better, this time around the virtuosity isn’t at the expense of the individual tracks. Secondly, yes, that is a Dire Straits cover on there. Ultimately, I’d rather listen to the original but it’s an interesting take even with the vocal changes to bring it a little more up to date.

Thirdly, I do need to point out that this isn’t a metal album, despite what you might be expecting from Gug G. Tonally, it’s a lot lighter – more arena rock by way of melodic rock than anything else. If you’re looking for the same aggression that you’d get on his earlier works, I’d say you’re going to be disappointed. There’s nothing extreme, and even the guitar tone has the softer 80s-style chorus feel to it. Whether that works for you probably depends on whether you want to put Gug G’s previous work away and listen to it for what it is.

And what is it? Well, it’s a solid offering, but not much more than that. There’s groove and swagger in tracks like ‘Big City’ and opener ‘Letting Go’, and there’s instrumentals such as ‘Fearless’ and ‘Thrill of the Chase’ to satisfy the technique fans. We get some slightly darker leanings on tracks like ‘Mr Manson’ and ‘Don’t Tread On Me’ that’ll satisfy those looking for something a little harder. However, overall it’s a little bit unsatisfying – there’s a sort of uneven feel to it and an underlying nagging sensation that Gus G isn’t really pushing himself anywhere on this album. If you’re a fan of Gug G or guitar pyrotechnics in general, then there’s certainly enough on here to enjoy, but otherwise it’s a fairly safe album from someone who has definitely got more in the tank – good, but not great. 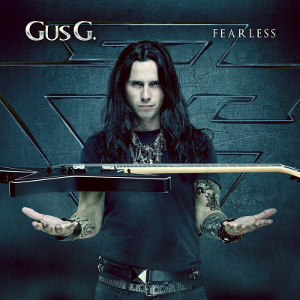