Arguably the most anticipated headline set in the history of the Download festival, Guns N’ Roses lived up to the hype with a three hour performance that easily surpassed all expectations. When the introduction kicked in at ten past seven it was a clear sign the band would be appearing right on time and sure enough several minutes later GN’R burst onto the stage with a rousing ‘It’s So Easy’, part of an opening salvo that also took in ‘Mr Brownstone’ and ‘Chinese Democracy’. With the trio of Axl, Duff and Slash now reunited this was as close as many would get to seeing the classic line-up on the same stage and recapturing the spirit of the Sunset Strip years.

The top hatted guitarist teased the audience before leading the band into an explosive and intense ‘Welcome to the Jungle’, which proved to be just one of many soar-away highlights in a set that mixed up covers, deep cuts and included all of the songs the crowd had come to hear. In both good mood and good voice, Axl sounded more at ease on the mid-tempo ‘Better’ and ‘This I Love’ than breathless rockers ‘You Could Be Mine’ and ‘Shadow of Your Love’ whilst Duff’s punk influences were evident as he took the mic for a raucous cover of the Misfits ‘Attitude’. 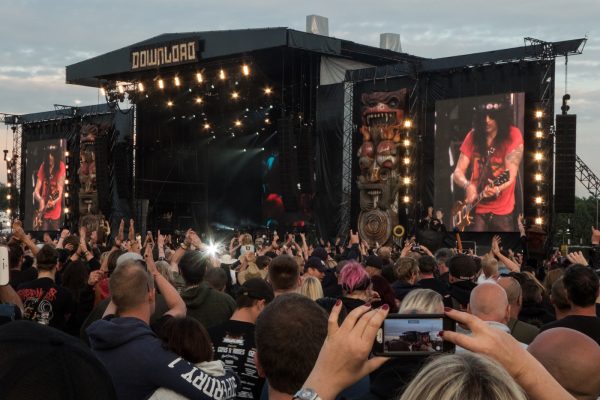 But the real star of the show was Slash who was in imperious form, taking solos at seemingly every opportunity and coming close to completely overshadowing his illustrious band mates such was his sheer presence. A cover of Velvet Revolver’s ‘Slither’ and ‘Civil War’ were huge moments leading into his long solo section before he was accompanied by Richard Fortus for a sublime duet on ‘Wish you Were Here’ that segued into the coda of ‘Layla’, with Axl sat at the piano, and climaxed with a triumphant ‘November Rain’.

Some three hours after taking the stage, as they finally closed out with fireworks, confetti and ‘Paradise City’, it was clear that Download had demanded a great set and Guns N’ Roses had truly delivered. 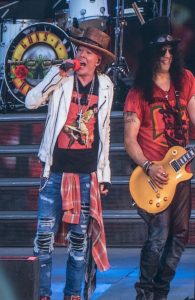