The Calton Songs marks something of a milestone in the career of Scottish rock band GUN. From signing to A&M in 1988, big success via MTV, their singles chart peak came in the 90’s with a cover of Cameo’s ‘Word Up’ (a 2022 version of which is featured here) entering the UK top 10, tours supporting major artists (Rolling Stones, Bon Jovi, Def Leppard, Iron Maiden), followed by their break up in 1997. And that seemed to be the end of the then Mark Rankin fronted band (and it was for many) however, in 2008 GUN were back. Initially with former Little Angels frontman Toby Jepson replacing Rankin, but Jepson would only record one EP (Popkiller) with the band before moving on to resume his solo career and eventually forming Wayward Sons. Dante Gizzi moved from bass to lead vocals alongside brother Jools on guitar, Paul McManus on drums, Andy Carr on bass and Tommy Gentry on guitar the Scots were ready to “take on the world” once more. With seventh album Favourite Pleasures released in 2017, their most successful album since Swagger 23 years before there is no doubt that there are still plenty of rounds left in this GUN.

The Calton Songs finds the band taking stock during their enforced lockdown break, and to revisit moments from the earlier albums and it feels like a celebration of their career to date, designed to clear the tables prior to moving on. Along with one new song are twelve reimagined/stripped down versions of the Rankin catalogue plus one from 2015’s Frantic (its title track). This is, however, no unplugged cash in project with a sprinkle of electric guitar and keyboards throughout it sees the band working hard to add something to their legacy. Opening with the new song and first single (released on 18th May 2022) ‘Backstreet Brothers’, a full on electric rocker which, although in subject matter looks back to those early days on the streets of the Calton district north of the Clyde in Glasgow, points to the hard-edged future intentions of the Gizzi brothers. The balance of the album breaks down to five tracks from debut album Taking On The World, three from its follow up Gallas, two from Swagger as well as one each from 0141 632 6326 and the aforementioned Frantic, plus a slight curve ball in the shape of ‘Better Days’ B-side ‘Coming Home’. Following the opener there is no more fitting way to launch the archive tracks than with ‘Better Days’. This was the springboard for the project being the first track to receive the new treatment, the vocal approach is a strong point with Dante proving he is well deserving of taking over the mike alongside some sympathetically rich backing harmonies. Those choral backing vocals continue on ‘Coming Up’, which is more straight ahead with full on electric breaks from Jools. ‘Steal Your Fire’ takes us into more unplugged territory, as does ‘Word Up’ which, with it’s added choir, is a highpoint of the set as always. Ballad ‘Frantic’ is a lesser known track but this rework will hopefully point older fans who have lost their way to the more recent catalogue. ‘Taking On The World’ takes on an almost country vibe on this totally stripped back take as does the piano heavy ‘Crazy You’ from 0141 632 6326 which still manages to bounces along as it did in its original form. ‘Money (Everybody Loves Her)’ has always been one of my favourites from TOTW and this version rocks even before another wonderful Jools solo with its choppy percussion pushing it on as it leads off a classic run of ‘Shame On You’, the lighter ‘Don’t Say It’s Over’, ‘Inside Out’ and Gallas single ‘Higher Ground’ with the full-throttle backing vocals returning with stunning effect. As when it was originally released, ‘Higher Ground’ becomes an inspirational and forward looking battle cry. After all that ‘Watching The World Go By’ seems a lyrically down beat way to close out a mainly motivational set but with another seriously strong vocal performance from Dante and the accompanying choir which lifts it to another musical peak despite its lyrical outlook.

The band have already been out on the road in suitably stripped down form in support of the album and from what I have read are in great form and in November The Calton Songs tour proper kicks off in Madrid. Available on Cherry Red coloured vinyl, CD, cassette and digital formats The Calton Songs is a very strong bookmark in the latest chapter of GUN, but hopefully it won’t be to long before a completely new saga is written when the band return with their next outing. 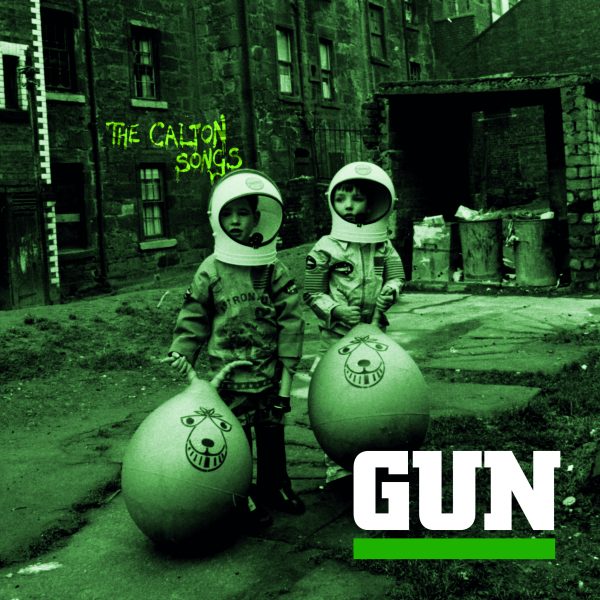