The thing that initially got me to check out Italian rockers Grindhouse was the fact that one of my favourite vocalists, Michael Bormann, was their lead singer. The former Jaded Heart frontman has been quite prolific recently and even made mainstream TV late last year on Germany’s version of The Voice, even making it to the ‘Battle Stage’ of the competition. So as an established fan it’s great to seeing him doing so well and been so productive. You can never have too many albums with Bormann’s voice on in your collection in my opinion.

Grindhouse create a hard-edged melodic rock sound, imagine bands akin to Guns ‘N’ Roses with that rock ‘n roll energy and punch then mixing it up with a slightly more polished edge and an extra double dose of melody and smoother choruses. I took a shine to it quite quickly and I think most melodic rock fans will find a track or two here that will quickly embed itself on their eardrums. It may not be perfect but it is very enjoyable nonetheless and definitely worth a spin from melodic rock fan boys, especially those who desire a heftier edge to their melodious tuneage. I actually found this to be a nice little surprise and it’s a shame I may never have discovered this band if it wasn’t for the involvement of Bormann.

The core of Grindhouse guitarists Piero Ventimigilo and Stefano Martolini chose well in recruiting Bormann to their band as he adds that little bit extra to make their songs have a stronger impact. Sometimes hired gun projects fail miserably because the singer’s heart isn’t invested in the songs or the band but that certainly isn’t the case here Bormann puts in a sterling performance that will have his established fans dancing around their living rooms. In fact I’d go as far to state that I think this may be Bormann’s best recorded performance since his days with Jaded Heart and there is a slight similarity in the feel of this album to that beloved cult German band.

Going back to Ventimigilo and Martolini as this is far from a one man effort, they have crafted some wondrous driven gritty guitar riffs that grab you with their rambunctious energy. They also throw loads of ultra melodic guitar licks into the mix, some melody driven solos which give a slight nod to the masters of metallic melodic solos, Iron Maiden. The level of musicianship shown on this album is of a very high standard, I was expecting something a little rough and ready, but these guys really know how to mix up melody and the energy of a power chord.

Tracks to check out include ‘Ain’t Nobody’ a very brave cover of the famous Chaka Khan disco classic, trust me it’s actually quite good and very rocked up. I think power ballad ‘The Enemy’ actually showcases every element about the band that is worth appreciating, compelling and thoughtful lyrics, smooth melodies and an infectious guitar riff. 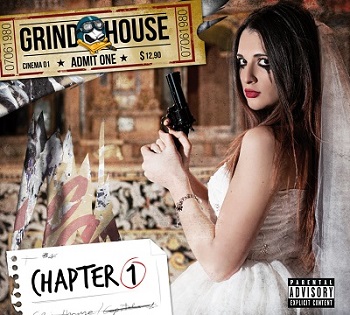