It’s a slightly up-market affair this evening at Scala in Kings Cross. A one time cinema brought back to life with bright lights and fresh paint. I was confused and slightly humiliated when I was given a stamp upon entry and complained that it hadn’t come out. ‘It’s UV’, said the guy behind the desk. Obviously! Silly me. There was even a proper cloakroom – indeed, not your average underground metal gig. But, of course, this wasn’t your average metal gig – Graveyard are a hard-rock band with a mass following spanning across various genres and ages. 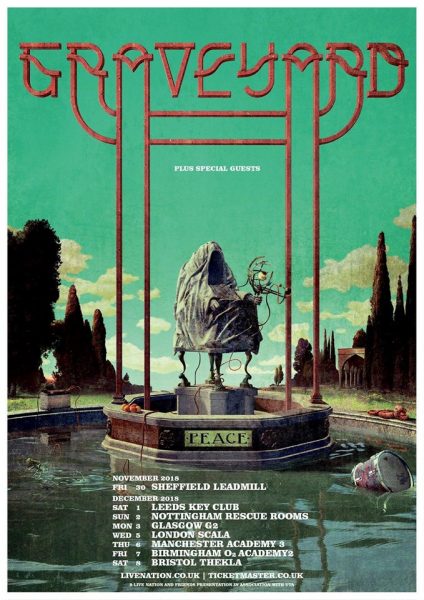 They are hard to pin down, which means this evening brings together a mixed throng of metalheads, old school rockers and reborn hippies. As I look out from one of the balconies (there are two more above me) I get the feeling that this is going to be an evening of theatrics – although the packed out space still makes it feel warm and intimate.

Graveyard are preceded by Gothenburg’s Bombus. Formed in 2008, and with three studio albums under their belts, Bombus are a band who are in some ways similar to tonight’s main attraction. They have catchy riffs, layered with the gruff vocals of Feffe Berglund. Their occasional dual vocals, when Berglund is joined by Matte Säker, sometimes feels a little Beastie Boys or 2006 Trivium (you know the song I mean) – it is a drive for the mainstream, perhaps.

However, they closes on their 2013 release ‘Into the Fire’ which goes a long way to smashing through any reservations that I had. This song begins with theatrically slowed down ring-out chords which is more doom in style. It’s instantly entrancing, and is something which makes Bombus stand out this evening. In many ways a traditional heavy metal band, but with a playful approach to incorporating these doom-esque elements; factors that their more recent recordings seem to have moved away from.

Gothenburg’s main export Graveyard headline this evening to an eager and packed out Scala crowd. Formed in 2006 and having just released their fifth studio album, Peace, which reached No.1 in the Swedish National Record Chart, these Swedes mean serious business. Their wiggle-worthy bluesy rock is captivating – managing to combine commercial catchiness with rich musical skill and complexity. They storm onto the Scala stage with a track off their new album, ‘Walk On’. The slow, build-up, rumbling riffs gather momentum during the verse, like a wave in the distance, heading for shore. Joakim Nilsson’s vocals are smooth and folk-ish, with a twang and groove reminiscent of early Kings of Leon. It’s a song to mellow out to.

‘Goliath’ from the 2012 Lights Out album is a more upbeat number, with psychedelic fast-running riffs nodding towards 1970s hard rock. It’s toe-tapping goodness. But then what makes Graveyard so special is that they can then come out with a smouldering song such as ‘Hard Times Lovin’. It’s like Nick Cave meets Johnny Cash meets Katatonia. It’s true, heartfelt, musical craftsmanship. The lyrics may be cheesy and predictable, a man pining over a woman he has left behind, but the music is enticing all the same.

The night ends with two encores, the final song being the much-anticipated and much loved ‘The Siren.’ A delicate, bluesy, Odyssey-inspired tale of seduction and adventure; you can almost imagine Nilsson sitting at a campfire, telling his story to a circle of eager ears. This is beautiful songwriting.

Graveyard are a band who heavily feed into a retro, 1970s hard rock sound, but with an intensely complex and mature attitude to composition. Larocca-Ramm’s guitarwork is effortlessly groovy, whilst Nilsson’s vocals are melodic and soulful. They are a band who are the best at what they do, and continue to grow in their widespread appeal. Just try and stop that toe from tapping. Just try.