If anybody deserves the tag “legendary” then it’s surely Graham Bonnet. His vocals on Rainbow’s Down To Earth album defined a generation yet it pigeonholed him as solely a rock singer. In truth there was so much more to his arsenal and this latest compendium, The Historic Collection Of Graham Bonnet, evidences a multifaceted vocalist and shows two sides of the same coin; the soulful singer on his covers album, Here Comes The Night and the throat shredding roar displayed on Live Around The World.

Disc One: Here Comes The Night

With an impressive and unrivalled curriculum vitae, it seems like there’s not a musical genre that Graham Bonnet couldn’t turn his talents to. Known for fronting such luminaries as Alcatrazz, Anthem and the Michael Schenker Group his status in the metal world is assured yet his roots stretch right back to the ‘60s and it’s into that era’s aesthetics which Here Comes The Night taps. Originally released in 1991 it was an album that threw many of his fans in a hex, yet it was the perfect vehicle for Graham’s versatile voice. With a Motown groove ‘Something About You’ is a strong opener which captures the rockier end of The Doobie Brothers and shows a soulful side to Graham’s repertoire that was sometimes swamped by shredding guitars and thunderous drums of his previous projects.

To be fair Graham Bonnet was never your prototypical metal dude. Attired in Hawaiian shirt, casual slacks, and sunglasses he often looked like he was fresh from the set of Miami Vice. But looks can be deceiving as the title track proves; a cover of the classic Them tune it finds Graham crooning as if a torch singer in a late-night jazz bar. It’s slow and sultry and places his malleable glottis centre stage while the sorrowful saxophone creates a nocturnal feeling that echoes throughout Here Comes The Night. Songs penned by artists diverse as Sam Cooke, The Bee Gees and Ray Davies all get the Graham Bonnet treatment while a re-recording of his very first hit single (‘Only One Woman’ by The Marbles) makes this album a must for Bonnet aficionados.

Disc Two: Live Around The World

Finding Graham Bonnet back on familiar ground Live Around The World does exactly what it says on the tin and compiles 18 classic tracks from various locations and assembles a “greatest hits” set that spans his entire metal years. After a brief introduction (‘Night Of The Shooting Star’) things get off to an explosive start with the raucous ‘Too Young To Die, Too Drunk To Live’. Penned by Yngwie Malmsteen and Bonnet it was a highlight from the first (and best) Alcatrazz album, No Parole From Rock N’ Roll. Also from that record come ‘Jet To Jet’, ‘Island In The Sun’ and ‘Hiroshima Mon Amor’ all of which feature some fine vocal gymnastics and push the needles firmly in the red.

A cursory glance at the album’s credits shows what a stellar cast of musicians Graham Bonnet wrote songs with so Live Around The World wasn’t going to be anything but 75 minutes of the very best music. Each song jumps out of the track listing and demands your full attention but two from the Impellitteri album Stand In Line are noteworthy, as is a multi-layered version of MSG’s ‘Desert Song’. Graham Bonnet is perhaps best known for his tenure in Rainbow, and we get four from his one and only album with that group, Down To Earth. Aside from the two singles we get deep cuts in the shape of ‘Eyes Of The World’ and ‘Lost In Hollywood’, both of which become infinitely heavier in the live environment with the latter making for the perfect conclusion to this historic collection.

Disc One: Here Comes The Night

Disc Two: Live Around The World 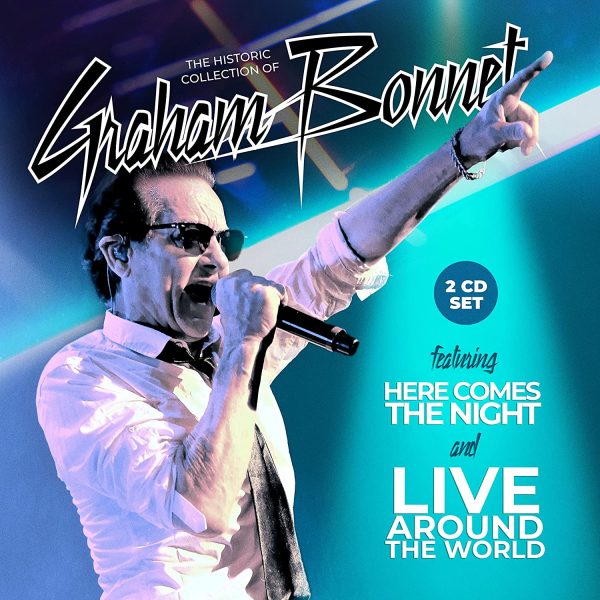