Paul Castles succumbs to a blackened wall created by Grafvitnir, whose fourth album was released via Swedish underground label Carnal Records on December 16 2016

Grafvitnir are so dark you almost need to turn a light on before playing this release. But lights on or off, Obeisance to a Witch Moon is a storming album that grips you from the opening pummeling groove of ‘Lightbringer’ after which it rarely loosens its grip.

This is the fourth album from the Scandi occult outfit and there are some devilishly good tracks here. It’s full of fire and fury and the flames stretch so high they almost engulf you. But from within the midst of this internal inferno Grafvitnir have created some blasphemous brilliance.

Although Grafvitnir have clearly been around for a few years at least, they play their tarot cards pretty close to their chests. Hailing from the Luciferian dark woodlands of Sweden is about all we know.

But they have thoughfully informed us that the album was highly inspired and composed under the influence of the lingering streams of Gamaliel, the mystifying rays of Gha’asheblah, the White Moon of Chesed and the Black Moon of Geburah.

Second song ‘The Great Beast’ is another ferocious fuzzed up ride while on ‘Wrath of the Tempest’ Grafvitnir taunt and tease through the intro before sending an avalanche of riffs tumbling in your direction.

Obeisance to a Witch Moon possesses more demonic reference points than an Exorcist convention and even when the literal interpretation is lost on such numbers as  ‘Nigrum Ignis Serpentem’ you just know they’re not singing about a country walk hand in hand with your girlfriend. In fact the Latin lined song is one of the heaviest here with an incessant drumbeat to the fore throughout with the Swedes describing the track as a Solstician hymn to the Black Fire Serpent.

‘Via Dolorosa’ and ‘Serpent’s Blood’ are both three-minute crucifix crushers, the latter possessing a hook big enough to trip up an anaconda. ‘Children of the Void’ has a roaring riff that almost smells of evil from the very start, and the Scandi purveyors of putrid prose again unleash a stomach pumping diet made up of the diseased and the damned.

If you want to look for faults then perhaps it’s just a little too one-dimensional in places. So if you feel the need to come up for air from the toxic hellhole then you may find yourself waiting for some time. For those with a stomach lined with Satan’s juices then no such fears will surface. 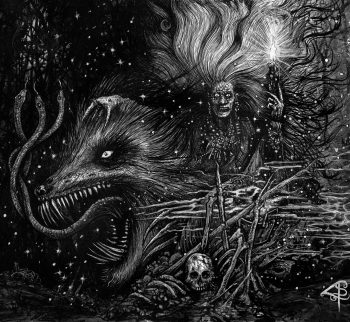