There’s something of a trend at the moment for bands reuniting, often a couple of decades down the line, and then finding themselves even more popular second time around. Carcass are one such act and over in Canada it looks like death metal legends Gorguts are set to undergo a similar transformation. The band’s first couple of albums Considered Dead and Erosion of Sanity saw Gorguts lay down a metal marker of intent that could stand toe to toe with anything of that genre at that time.

The Canadians have travelled a long way musically since then and while new release Coloured Sands has enough venom to down a bull, the present line-up are now playing a more complex musical game with a myriad of metal layers not too dissimilar from the likes of Nile and Ulcerate. Tracks such as ‘Forgotten Arrows’ are twisting technical songs that weave their weave into your consciousness rather than simply pummel their way directly into your skull as Gorguts so often did in their early days. At times the vocals of Luc Lemay, the sole survivor from the early days and the band’s driving force, are barely audible against a thrashing tortured backdrop.

The album’s title track opens with an inoffensive intro but it gradually meanders into more menacing territory with a throbbing sinister pulse beating away. ‘Battle of Chamdo’ is perhaps an intricate instrumental diversion that most fans could have done without, and it brings nothing to the Gorguts table, but it is followed by an all out assault in the ferocious form of ‘Enemies of Compassion’. This bestial blast is proper old school stuff with Lemay’s croaked cry carried along on a thrusting rhythm and guitar solos full of jagged edges. While Coloured Sands should reside quite happily in the collection of any genuine death metal fanatic, it delivers much more than the pure brutality of the genre, that you would expect from the likes of Cannibal Corpse.

Gorguts can serve up the blood and guts with the best of them but this is a more challenging offering than their earliest work. For a start the content theme throughout is the country of Tibet and its struggles both internally and externally down the years. As if trying to capture the complexities of that tiny nation, Lemay mixes things up on a regular basis. On numbers such as the lengthy ‘Absconder’ he breaks up the blastbeats and battering ram approach with some slower sections, allowing the song to breathe, while never really relinquishing his vice-like grip. Final number ‘Reduced To Silence’ is another crusher from the Canadian veterans. A dynamic, if not desperate start, before collapsing into contorted chaos.

Coloured Sands has been a 12-year wait for long-time Gorguts gorehounds but now it’s with us it’s simply a case of exploring its treasures as while some are easily found on the surface, many others require deeper digging before they see the light. 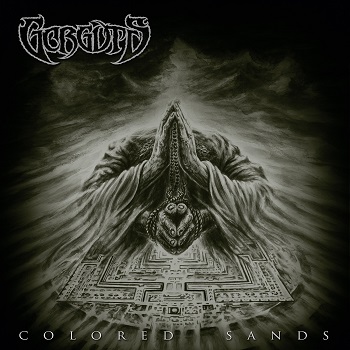