Toronto’s Godstopper made a resounding and distinct statement with 2012 debut What Matters: discordant guitars jangled beneath dual vocals, a kind of malevolent mutating beast that recalled both Fugazi and Big Black before dropping pounding Floor-worthy riffs. Doom metal, hardcore and (yes, even) indie rock have found an unlikely but triumphant meeting point in the rehearsal space of this Canadian quartet, who pull off this strange brew by putting comfort and convention firmly in their crosshairs.

Things get creepier on the EP’s latter half: ‘An Old Photo’ opens like some perverted Melvins-Pixies collaboration, partnering a happy refrain with sluggish, a-melodic guitar. Tumbling, tired riffs and doleful vocals follow; feedback gradually intensifies and single notes swell into crunchy power chords, but instead of climaxing give way to that happy chorus. The effect created is one Godstopper have proven to be masters of: it’s at once supremely unsettling and strangely cathartic. ‘Young Queen’ is similar: stuttering palm-muted riffs and cries of damnation suddenly but seamlessly shift to a steady, post-rockish rhythm, which in turn contorts to resolve at the awkward opening riff, rejecting what would be a happy conclusion in favour of a confounding question mark. It’s this tugging between yin and yang, and landing somewhere uncomfortably in between, that makes Children Are Our Future so enjoyable: as much as Godstopper might push their luck by throwing curveballs to convention, you can’t help loving them for it. 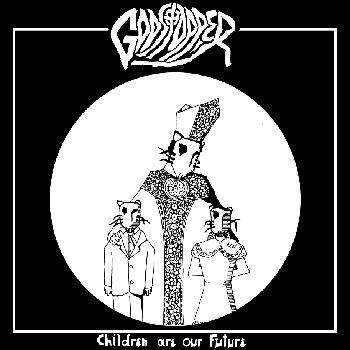