Ok, let’s get the background and the concept (oh yes, it’s a concept album – and then some) out of the way first. Because, yes, they are interesting but they are also, when all is said and done, an adjunct to the music. The music should always be the thing. Let’s not lose sight of this.

So, yeah, Goblinsmoker. Great name. Derivative of ‘Dopesmoker’? Very possibly. Deliberate? Almost definitely, the heady scent of Electric Wizard hangs in a fug over this. The skinny? They started out as a one man project in Durham in 2016 with a clear goal in mind – to meld black metal with the dynamics and fuzz of Doom. All went well, a drummer joined and they became a viable unit – still harbouring no wish to ever play live. However, two eventually became three after various offers to “take the toad on the road” began to materialise and a live reputation began to develop.

And the concept. *deep breath* – ‘A Throne In Haze..’ is album two of a planned trilogy, telling the story of The Toad King – ruler of the goblins. They live in a forest kingdom where the goblin subjects happily sacrifice themselves to be smoked by their king…I’ll just let that sink in for a moment.

Album two tells of the King and his goblin army, being manipulated by the goblin shaman (see, just when you think it can’t get any better) into going to war with his own kind. Goblin/toad war, dude!

So, having vowed not to waffle on about the concept for long I’ve just done exactly that – but, hey, when a concept is that bodacious!

To the music. Doom definitely takes the upper hand but the vocals and atmospherics of Black Metal are definitely here in spades. The sound is incredible. The first thing we hear are cymbals and even they’re heavy! And from there we’re off, the scene is set and visions are created in the mind’s eye – bugger The Cure, this is what a mythical forest would actually sound like. Finally (chill dude, things will happen when they happen) the gut-trembling guitars roar in and a full-on sludgefest hoves into view. It eventually kicks up a gear before dropping waaaay down into a humongous drone.

And on it goes. Guitars just keep getting bigger. It lumbers on relentlessly. There is a brief, almost thrash-like assault (run goblins, run!) borne aloft by some extraordinary drumming. ‘The Forest Mourns’ is taken at an understandably (and tres loud) funereal pace – suddenly dropping off a dirty feedback precipice before (like all great thrill rides) flinging you back off in a totally different direction. It all ends with a blast of what has been some of the finest, most expressive feedback ever committed to record. There is a definite plan with this feedback, it’s a character in itself, its clear, piercing howls cutting cleanly through the fuzzy onslaught like rays of sunlight through a canopy of foliage.

All hail the concept album. We need escapism like this right now and Goblinsmoker are offering us a totally immersive experience and, to their credit, they jump into this with both feet blazing (yeah, yeah, I’m mixing synonyms and idioms for comedy effect. If they can write about goblin smoking toads I think I have a bit of wiggle room) with the utter commitment of a Strasberg method actor. They are aural storytellers. Granted, the story in question is madder than a warehouse full of hatstands but who cares?

This is wholeheartedly recommended to any and all aficionado’s of Doom or any of it’s fuzzy offshoots, all delivered with the kind of heaviness that needs to be experienced, nay, felt, live. Roll on vol.3.

Released by Sludgelord Records on 7 February 2020 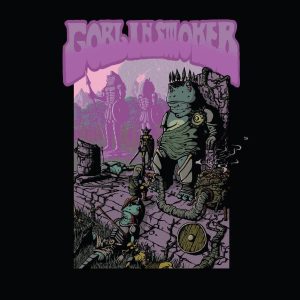