In introducing Goatess to you it’s probably best that we grab them by the horns and offer a brief synopsis for those whose path has not yet been crossed by these promising newcomers. Goatess hail from Sweden and their imaginative vibrant pulsating sound flickers loosely between the doom and stoner camps. Svart Records have put this together and Goatess are a welcome addition to the Finnish record label’s stable that is already thriving with the likes of High Priest of Saturn.Your life will be enhanced should you take the trouble to familiarize yourself with this, Goatess’ self-titled debut album.

The Stockholm quartet have only been performing under their current name for a year or so which makes this storming debut release even more worthy. Lynchpin is Christian Linderson who has already touched many people through his work with bands such as Count Raven, Saint Vitus and doomheads Lord Vicar, with whom he’s probably best known. Linderson leans towards a vintage vocal style but while the sound may have its roots in the 70s, Goatess have brough the psychedelia forward a few decades ensuring that the Swedes sound dynamic rather than dated.

Opener ‘Know Your Animal’ is an easy listen, gently leading you into the land of the Goat. ‘Alpha Omega’ is leaning more towards the doom side of their character, slow, and droning but with a sharp riff that carries it well. Like bands such as Graveyard and Venomous Maximus, Goatess conjure up plenty of creative harmonies, that bury themselves ever deeper into your soul with every listen. ‘Full Moon at Noon’ sees Linderson exercise several parts of his vocal repertoire with some great extended anguished wailing. ‘Oracle Pt:1 The Mist’ is more of a straightforward ballad less energetic than the rest of the material and a shade too perky to be classified as doom.

While Goatess are not quite as heavily cloaked in doom as Lord Vicar, there’s no escaping from the dark forces that pulsate through ‘Oracle Pt:2’ An immense droning intro immediately makes you sit up and once Linderson enters the equation we’ve got a full on doom nightmare creaking at the sides with savagery and sorrow. This slowburning stunner is almost nine minutes long, giving the grooves and pounding drumwork time to work their way into your skin and bones. What’s more, the final couple of tracks are even longer with ‘King One’ benefitting from a pounding two-minute sequence of riffs and bludgeoning bass before Linderson’s distinctive whine pitches in bringing the whole sound together.

It’s fair to say that Sabbath’s influence runs through this album like a steamroller, but then that’s not meant as a criticism. Even Linderson’s occasional ‘alright’ barks bare more than just a few echoes of Aston’s greatest son. Goatess is a debut that suggests Linderson’s latest incarnation could be his biggest and best yet. 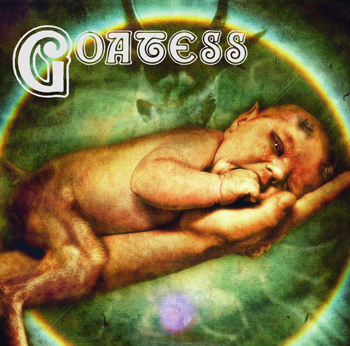