I had the pleasure of catching Goatess live on the small stage at Scruffy Murphys in Birmingham not that long ago for what, with apologies for the oxymoron, was a glorious night of unbridled doom.

In particular the singer Chritus Lindersen was an absolute joy, animated and engaging throughout, and clearly the perfect vocal vessel for the Swedish band’s doom riffs and with his mountain-high credentials gained during stints with the likes of Saint Vitus and Lord Vicar.

So the chance to get reacquainted with Goatess, and more specifically their new album Blood and Wine, is at first glance an opportunity too good to turn down, until lo and behold the sad truth surfaces that Chritus has left the room. And not just him either! Since their excellent last album the bass player has also done a bunk, leaving just drummer Kenya Karlbom and guitarist Nicklas Jones from the last album.

So new line-up but fortunately what hasn’t changed is the band’s overall mindset, vibe and ethos. Don’t worry doom fans, Goatess are still churning out the kind of stuff that you cling to like a long lost family artifact.

Blood and Wine is a nine-track album and from the opening fuzzed up groove of ‘Goddess’ it becomes clear that the Goatess mojo hasn’t strayed too far from their Sabbathian sympathies. Shuffling through songs such as the low slung crusher ‘Dead City’ and the mean and moody ‘Growler’ the old magic from the Swedes is still very much in evidence, sparkling away like lights on a Christmas tree. Despite the inherent doom demographic, Blood and Wine remains a resolutely upbeat release, far from a depressive listen.

As for the vocals, well new singer Karl Buhre (Crucifyre) comes across as anything but a poor substitute and very much his own man in terms of delivery and style, so the absence of Chritus isn’t quite as painful for Goatess as perhaps initially feared.

Highlights include the rumbling 70s throwback ‘Dark Days’ which takes on a moody mindset all of its own, with Buhre howling the song’s title with raw passion, and ‘Dunerider’ which has distinct echoes of a slowed down Queens of the Stone Age.

In fact the revitalised line-up – completed by Samuel Cornelsen on bass – is full of Swedish swagger and while the dark demons that align closely to the band’s spiritual core (so go ahead and light your candles) the soundscape is vivacious and vibrant rather than depressing and dank. In fact at times it almost feels wrong to even call it doom at all such is the brilliance of the peaks as the band explore all points of the sonic compass.

The closing album title track stretches its legs to a full 15 minutes during which Goatess appear so comfortable in their own skin, their almost in danger of falling over their own riffs. Blood and Wine is an album that you’re unlikely to tire of.

Reviewed by Paul Castles
Released via Svart Records on 27 September, 2019 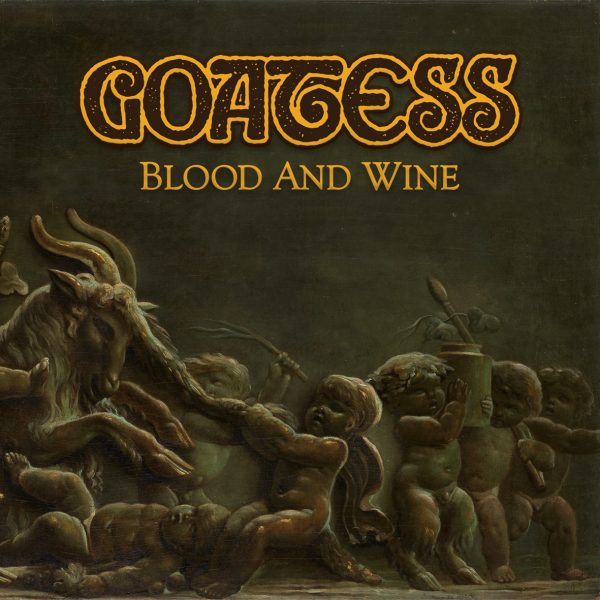