Gloomy Grim are back and Paul ‘cheer up, it might never happen’ Castles is quick to check out this devilish Satanath Records offering, released on 6 June 2016

It’s been a while since we’ve heard from the comically named Gloomy Grim but The Age of Aquarius has been worth the wait. The Scandi horror/black metal outfit have been around for a couple of decades. This is their sixth album although the first since 2008 release Under the Spell of the Sunlight. Much of their previous material was released via underground French label, Holy Records (Burzum, Nightfall) although the switch to the superb Satanath Records scarcely suggests any loosening of their satanic strings. Satanath actually made a point of releasing this horned beast of an album on 6/6/16 – that said the date would also have pretty much suited practically every other band on their roster!

Gloomy Grim’s name paints a fairly cold and unwelcoming picture and The Age of Aquarius fits pretty closely to that description. The classic black metal caterwauling is provided by Agathon, who created Gloomy Grim initially as a solo project just over 20 years ago. This eventually developed into a band with some impressively named members, none more so than bassist Nukklear Tormentorr. Agathon also drums with Finnish goth/black metal outfit Soulgrind but the focus here is on Gloomy Grim, and The Age of Aquarius in particular. The album is certainly listenable and has the requisite black metal ingredients while the songs themselves are well sculpted.

While the content is invariably dark and demonic the songs themselves flow effortlessly. ‘The Rise of the Great Beast’ is a marauding monster with a towering dominant chug that tops and tails this opener. Agathon has the kind of painstaking screeched delivery that could strip the paint off a new car straight off the production line. The mood is tense, the tempo mid-paced and some of the guitars spikier than a crown of thorns. The cold winds blow fiercer on ‘Germination’ in which Gloomy Grim adopt a thrashier stance and the barbed attacks are just as demonic sounding on ‘A Lady in White’. The dogs are well and truly set loose on ‘Beyond the Hate’ with guitars scratching away like flea ridden mongrels before Gloomy’s deep delivery bellows through the maelstrom.

On the slightly longer songs such as ‘One Night I Heard A Scream’ and ‘The Mist’ Gloomy Grim really allow the structure of the songs to develop, all bathed in a healthy dose of blood-splattered horror like a 70s gore flick. On ‘Time’ the cauldron starts to get hotter, with a spiraling twister of riffs conspiring to up the ante with a mid-song solo unleashed like a rampaging tiger as Gloomy cries out in his indomitable style, “This is the Age of Aquarius’.

If the dawning of the Age of Aquarius is meant to be a holistic peace and love combo, in Gloomy’s hands it becomes a blunt instrument with which to pummel you and by the time we reach ‘Light of Lucifer Shine On Me’ all semblance of decency and dignity has been shredded and stripped away as Gloomy Grim throw themselves over gleefully at the feet of Beelzebub, the crescendo given an added theatrical dimension through the presence of some snaking violins. No less impressive is final number, ‘Trapped in Eternal Darkness’, in which the walls close in on Agathon again in a frenzied and apocalyptic climax. 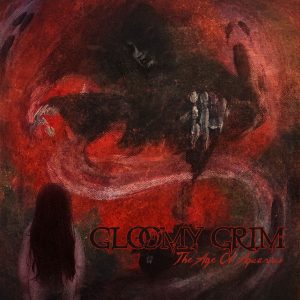