Since Deep Purple, a solo Glenn Hughes has retraced his steps back and forth on the path between rock and funk many times, apparently unsure of his true destination.

The Way It Is (1999), now remastered and doubled up with a Live At The Astoria gig, from 2000, sees him meeting himself at the crossroads.

Having washed the toxins from his system with the cathartic Addiction (1998), the religious intensity of that album was now replaced by a freedom to move seamlessly between pop, rock and funk. Too many moving parts, you might think, but let’s face it, with purification you’re gonna get a musician let loose.

Some great tracks here. ‘You Kill Me’, written and recorded with Steve Salas and Matt (G’n’R) Sorum, is a bulldozing, shout-it-out rock song, cut and shaped to fit a funk framework. It’s the perfect partner to the trio’s other contribution, the snake hipped, dance floor dazzler ‘Second Son’, which slips’n’slides through some old school, loose limbed funk rock grooves.

Hughes and his “solo” bandmates, guitarist JJ Marsh, and bassman Sampo Axelsson (now of Lions Share), fight their songwriting weight too. The rushing, strutting hard rock of  ‘The Truth Will Set You Free’ and the funkier, sharper ‘Rain On Me’ are probably the picks. That said, when the thick cut riffs are pared back, and the oiled up armour cladding is put to one side , as on the poppified rock of title track ‘The Way It Is’, we could be listening to the subtle, sophisticated exertions of AOR giants, Mr Mister. Doesn’t make them bad people, of course.

The second CD : Live At The Astoria 2, November 2000 is an “official” release of a much bootlegged live gig, in its entirety. It’s an unsurprisingly accurate record of Hughes’ power trio prowess, and neatly mixes his Trapeze (Medusa, Coast To Coast, Your Love Is Alright) and Purple (Sail Away, Lay Down Stay Down, Getting Tighter) past with newer material.

The remastering : Like some other burgeoning rock reissue/remastering labels, Cherry Red’s tech guy knows what he’s doing. We mean, he really knows what he’s doing. Where others, under major label or artist thumb, boost the loudness to headache levels, this guy just strips away the analogue bumps and squeaks, then sweetens up the treble and the bass, allowing the sound to bite a bit harder, with real clarity and heft.

Only what Hughes’ second coming deserves. 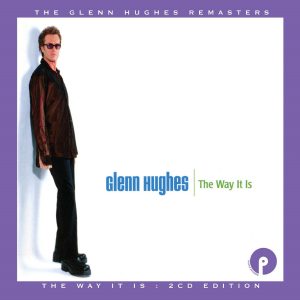