CD1 : By the time he got to Return Of Crystal Karma (2000), Hughes had put his serious head back on. It was his seventh solo album since leaving Purple, and, have you noticed? The voice? Still 100% intact, no fading in the sun, no ragged edges, still muscular, rippling with energy and duracell power. Like it was when it all began. The remastering emphasises the point.

The music is densely constructed, discordant in places (The State I’m In), pained and feverish in others, (Midnight Meditated), and both these tracks become profoundly unsettling as they spiral down, deeper and deeper.

Yet, in places, though this is more rare, as a band, Hughes, JJ Marsh, Gary Ferguson and new boy, Hans Zermuehlen on keyboards, lock onto an elusive groove. It works best on ‘It’s Alright’ – blissed out, souled out funkrock, laced with frilly, Philly soul.

But the album is temporarily derailed by a middle section that abandons substance in favour of ersatz style. ‘Switch Mojo’ (blighted by the beeps and burps of electronica), and ‘The Other Side Of Me’ plunder the giant store of off-the-shelf funk rock stylings, favouring the section marked “tuneless dirges”.

By now it seems certain that we can kiss goodbye to Hughes’s thoughts of one day emulating Elton John and/or George Michael in the world of popular music.

A vague and unsatisfying form of redemption comes in the shape of ‘Gone’, a dark, menacing rock song written with Tony Iommi, and ‘Angela’, a song that announces itself with a controlled detonation of proggy keyboards and razoring axework, before settling into a sweet soul groove.

But it’s too little, too late on a patchwork quilt of rock, funk and soul that’s just a little too threadbare to do its job.

CD2: Live In Sao Paulo (aka Live In South America). A “bonus” CD that beefs up this remastered package by again excavating Hughes’s past with Trapeze, though the real high spot is a spirited live version of Black Sabbath’s ‘No Stranger To Love’.

Remastering: ditto The Way It Is. 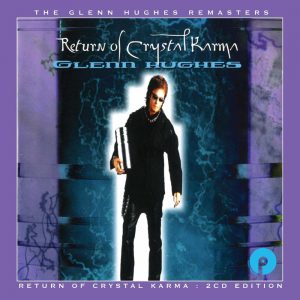