‘What’s It Gonna Be’ booms out from the stage as we walk up the stairs of the Leamington Assembly Rooms, sub-woofers kicking out the bass drum’s hefty umpf below our knees as we then stand from three quarters back. I was told the venue had a good sound system and within minutes that’s proven. On stage Laurence Jones is soloing away and there’s still a crowd out on the streets below due to come in. We’re nearly all present and correct by the time of soulful blues rocker ‘Gone’ with its fine harmonies and well tortured sustained guitar notes.

“It’s good to be back on home turf!” calls out the young singer/guitarist over Bennett Holland’s organ before his own trilled notes lead in with a slow burn for ‘Thunder In The Sky’. Before this one’s over there’ll be some raging fretwork, a bit of a go at the old whammy bar, application of feedback and some heavy posing down on his knees for the band leader, whereas the keyboard play player will rise from his seat to take his own solo.

It’s apparent the Laurence Jones Band have rocked up their set for what they perceive a classic rock audience would expect, and a cover of ‘All Along The Watchtower’ comes next – It’s their own take, featuring a slow solo played Jeff Beck style with plucked right handed fingers, followed by a keyboard solo featuring some choice chord shapes and a sound moving between Issac Hayes and Bernie Worrell before the band return at the deep end. It then changes tempo from slow to heavier blues rock, with solos within which Jones and Holland also swop licks from the Stones ‘Miss You’ before a wall of sound brings with it closure.

There’s a change of guitars and the next number sounds like a heavy boogie take on Deep Purple’s ‘Lady Double Dealer’ which is a bit strange, then they end their set with Creedence Clearwater Revival’s ‘Fortune Son’ amidst more down on knees posing. It doesn’t quite sit right with the rest of the set but is played well enough and the crowd have been applauding appreciatively after each number, ensuring some will check out the artist’s records. 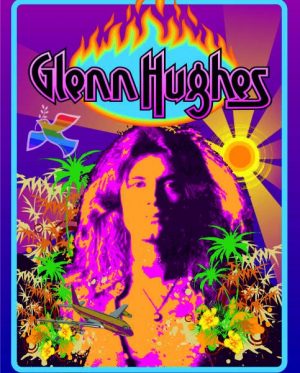 Over the PA, old radio footage voiceover of a Purple tour is heard as photos of yesteryear are up on a back screen being stared at, the band walk on and feedback erupts as the late Jon Lord’s voice announces: “Glenn Hughes” and on he strides, wearing the same union jack jacket he wore for Black Country Communion’s last couple of gigs, possibly and a little worryingly at first thinner, the hair shaggier and his bass guitar sound decidedly heavier as the riff to ‘Stormbringer’ comes down.

Guitarist Søren Andersen is dressed in silky black, keyboard player Jay Boe in denim shirt and jeans. Is this intentionally a Deep Purple dressage homage, I wonder. As for Hughes, there’s some heavy echo on his voice, and he looks like Geddy Lee’s missing brother in those sunglasses – his playing is getting progressively upfront like the Canadian’s too. Meanwhile, Andersen takes Blackmore’s solo and gives it a modern age sonic rock spin while staying true to the notes played, then an organ solo, builds to a crescendo with Boe also adding vocal harmonies as Hughes screams out over a tight finish.

The organ again rocks out for ‘Might Just Take Your Life’ before the band take it for a steady drive, Hughes giving it lots of hands gesture motion between his vocals, and Boe’s solo being the number’s highlight. “How ya feeling? It’s good to be home!” calls out the Cannock wailer as Anderson’s guitar lays down the riff to ‘Sail Away’. There are deep reverberations around the room, and some wonderfully snarly synthesiser lines. It’s slower initially with a bassier feel that gives it an almost dub feel and does plod a bit near the end, but the synth and guitar interplay is great albeit that both players could do with being up more in the mix throughout the night. Fernando Escobedo has replaced Pontus Engborg for this tour and with a quick tour of his kit he leads everyone on for the final “whoah-whoas” for band and audience to end on.

“I’m good, are you good? How can I not be in front of you!” Hughes begins his spiel, he mixes new age peace and love with Midlands matey patter. The gist of it is he’s never stopped missing Tommy Bolin and when he himself found sobriety he promised to play ‘Gettin’ Tighter’ at every show. Blackmore’s replacement was pretty much castigated by Purple fans for decades so his reappraisal shown by the cheers from the crowd here tonight is warming. As those who’ve seen Hughes solo before will know this song can be a straight cover or take off in several directions. Tonight we get a bass funk solo introduction, the band pan in for some soulful jazz rock, then another wah-wah bass solo before making out like a heavy Bootsy Collins and all pretty much before Escobedo takes us into the song good and true. Once there it’s like we’re out on the east coast in USA back in the 70s driving in a car with the hood down drinking and snorting things that will eventually do us no good but we’re all too young to give a toss.

While Hughes’ vocals opt a bit more for Stevie Wonder wavering than they have for quite a few years the overall sound is heavier, in between some space age synth playing. Anderson hovers around the middle of his fretboard before hitting the high end for some smoking wailing and the song continues to go off in various directions. Catching the look on the band members’ faces while this tour may be billed as Classic Deep Purple Live it’s not the numbers themselves that the band will play – Because frankly all the Mark III and IV tunes heard will have featured in his sets before at one time or another – but it’s the fact that like Purple in their heyday and many top bands of that era they would jam and extend the songs as they saw fit on the night, and this one while having several key rehearsed points obviously has them caught in the moment too. 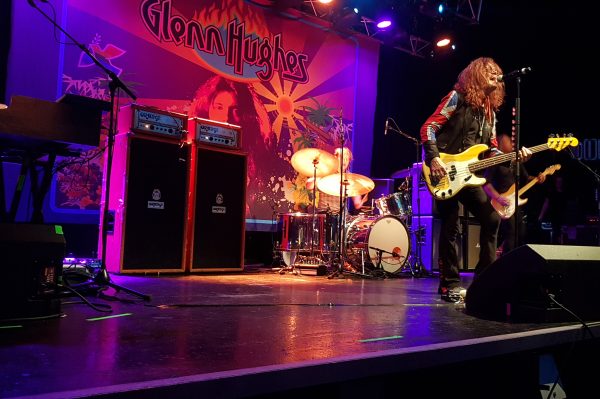 A roadie leaps on stage to take Hughes bass while he fixes his ear piece, and after some self-mockery he says “I wrote this with David,” and the formidable bass line of ‘You Keep On Moving’ is played. Anderson strokes out chords, echoed wails and sensuous licks before a thunderously bluesy solo over a rocking grind with some great drum rolls and soaring vocals and ending with an almighty round of applause. Mind you, they’re still a bit quiet, or rather polite out in Leamington during the songs; that or I’m just a lowlife.

Hughes cracks jokes about 1974’s legendary California Jam concert before they all leave the stage save Boe. We get an organ solo that encompasses jazz, classic, old school R ’n’ B, veers into the avant grade and pulls out all the tricks Jon Lord used to – including resting one’s knee across the keys – and it should be noted he clarity of the moog reproduction on his modern synths works better than back in the venerable day. Back on stage, Escobedo throws in a double time kick ass drum shuffle and we’re off with ‘You Fool No One’. Amid heavy riffing Anderson gives his guitar some single left hand trills before making it sing. The song itself stomps like a stallion on heat. Later, as guitarist and bass player trade licks the odd phone comes out to capture the moment (they really are polite and courteous out here in Leamington). They interpolate (to apply Made In Europe’s terminology ) a blues number that could be their take on ‘Going Down’ before returning back strong, Anderson shaking his hips as he moves forward playing. 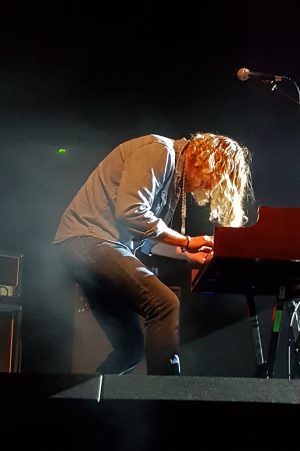 There’s more lengthy chatting from Hughes, giving us all time to catch our breath. He mentions he’s been growing his hair for two years four months, “Or is it a wig?” he jokes. We get more about sobriety (in a venue that serves two pints in a single plastic glass), and also the truism: “We live in a crazy world but music – music heals us!” That agreed, he declares “I’m going to do a blues song!”

‘Mistreated’ was David Coverdale’s signature tune from the time he wrote it with Blackmore for Burn through to around Whitesnake’s Love Hunter tour. This millennium alone Hughes has probably sung it live more often than his scotch ‘n dry former vocal partner ever did. Anderson wires it all up with an echoed explosion of sound prior to culminating in the knee-trembling riff and as Hughes calls out: “Come on – Oh yeah!” The audience claps in time then sings along come the faster “Ah-ah” part as guitar and chunky bass lock in, and while we really could do with Anderson’s guitar being louder on his solo here collectively the band rocks and pummels the song towards its climax including snippets from ‘High Ball Shooter’.
And then, we get that riff, one of the two most iconic in rock, the one that gets you kicked out of guitar shops if you play it, and yet when it’s played right ‘Smoke On The Water’ is nothing less than awesome. Box ticked. Hughes hits notes Gillan no longer reaches out for and with just Boe accompanying him on keyboards the singer drifts into ‘Georgia On My Mind’ – And it’s a goddam better version than the supposed great bootleg On the Wings Of A Russian Foxbat I got conned into buying a C90 cassette of back in the middle ages! – the band then mash it up one more time and “Kaboom!” they’re off.

Between the calls for the band to encore I look around at the crowd. No one’s wearing jeans older than six months, there are invariably smart tops with quite a few being a few brand new Deep Purple t-shirts. That goes for the women too, minus the t-shirts but with designer leather jackets. The venue itself is smaller than initially thought but charmingly decorated. An affluent locality on the whole one presumes, and we will venture this way again if they’ll allow vagabonds like me across the border. But enough sight seeking, they’re back… 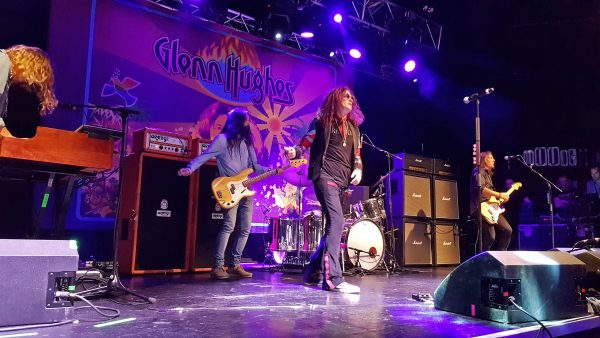 “God bless you all for coming!” calls his lordship and as drums roll and guitars spin we look at each with raised eyebrows and smiles that begin to take on the characteristics of a Cheshire cat. ‘Highway Star’ churns fast and furious with a great snapping drum sound belting away, a roadie’s playing bass as Hughes wanders round stage mic in hand before scat singing against Anderson’s guitar licks. The crowd are with it all the way, these Mark II tracks are a joyful surprise but even so we know what tonight’s final number has to be. The Made In Europe version is the signpost by which they’re guided and ‘Burn’ roars like the devil has just opened up the jaws of Hell to toast us despite which Anderson chews up his solo playing sweetly for his supper right through to the end. “You’ve been incredible” Hughes keeps repeating as they power through to the end, hand on his heart. And let’s face it, he wasn’t too shabby himself. Great band, classic songs, pretty impressive set.