Cherry Red Records maintains its relentless bombardment of repackaged and expanded Glenn Hughes remasters with Building The Machine from 2001, with a second CD and bonus tracks.

It’s a fascinating if sometimes uneven journey, as Hughes often redirects his gaze from rock to funk and then back again, album to album. On Building The Machine the spinning needle on his artistic compass has stopped somewhere in in the middle, serving up two of his all time best in a truly funked up ‘Can’t Stop The Flood’ and ‘Inside’ (with Bobby Kimball), both maintaining a seismic, funk rock rumble that mercilessly surrounds two cleancut choruses.

It’s a similar scenario with the Stonesy ‘Out On Me’ and Deep Purple cover, ‘High Ball Shooter’ – there’s plenty going on but again, the arrangements are lean and mean, precision tooled, full of moving parts, with every piece oiled up, friction free and rocking hard.

The album’s second cover, of Rare Earth’s ‘I Want To Celebrate’ is dense with detail, but unencumbered by unnecessary baggage. On this cover, it focuses on the rock rather than the funk, and that works a treat.

Once again, the heavy machinery needed to put such an album together is yielded by JJ Marsh on guitar and Gary Ferguson on Drums, with guest appearances from Pat Travers, Vince DeCola and of course, Bobby (Toto) Kimball.

The remastering focuses on sonic separation, cleverly unlocking individual sounds that weren’t all that obvious, even in 2001.

The second CD in the package is a recording of his gig at the E-Werk arena in Kolne in December 1999. Hughes really is in full flow, cresting a live music wave that started the year in Austin, Texas, and finished here in Germany 12 months later. He blazes through Purple’s “Goth metal treasure”, ‘Stormbringer’ and the heavier, funkier ‘Burn’, as well as his solo material, taking the audience with him, treating them to a rare performance of the track he did with the KLF, ‘America. What Time Is Love?’ Hughes reputedly claimed the recording sessions (with Cauty and Drummond) inspired him to kick his cocaine habit. “My credit on the single restored my confidence and was a lifeline… drugs are for losers.” 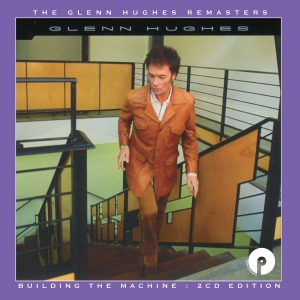