1996. As Hughes made his way through the clean years, he seem compelled to stop and tell us a few tales from the darkside. Exorcising past demons in song as it were. Unsurprisingly, this cathartic collection was titled Addiction.

Now, an expanded and remastered edition has been released by Cherry Red Records, with a prodigious number of bonus (live) tracks. This gives us reason, if any were needed, to first revisit Hughes’ original album, in enhanced sound.

Undeniably a hard’n’heavy rock album, in many ways it was a waste of Hughes (and Marc Bonilla’s) artistry as rock musicians. No doubt there are many fans who would salivate over the pitch black darkness of ‘Down’ and ‘Addiction’, the album track, and indeed many who would revel in the bruising hard rock of ‘Death Of Me’ and ‘Justified Man’. But few could make sense of such an approach stacked up against Hughes’ stated ambition of emulating Elton John and/or George Michael.

CD1 – the Addiction remaster – includes 3 bonus tracks. And this is where the expanded edition truly comes alive. The two classic Trapeze songs, ‘Way back to the Bone’ and ‘Touch My Life’ are an absolute blast – larger than life rock songs, driven by the relentless rhythmic pulse of funk. And the second CD, Live In Holland, 1995, continues the journey through Hughes’ career highlights – ‘Stormbringer’ and ‘Burn’ from his Deep Purple tenure; ‘Coast To Coast’ and ‘You Are The Music’ from his time with Trapeze, and probably the CD highlight, a tight, targeted version of ‘Muscle And Blood’, written by Hughes and Pat Thrall for their critically acclaimed, hard edged AOR album, released in 1982.

In most ways, these 2 CDs reaffirm what we already knew. Hughes is an immense talent. It is perhaps only his audience that has shrunk. 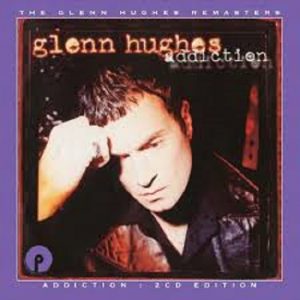