Hailing from West London, The Goldborns are definitely on the upswing having released a critically acclaimed debut EP produced by the Clash’s Mick Jones. A brand of post-punk that’s given bounce by a heavy injection of ska and it doesn’t take them long to win over the crowd. In fact even before they’ve finished their opening salvo (‘The Taxi’s Almost Here’) they’ve turned the venue into a sea of bobbing heads. Tonight’s set is predominantly new tracks from their forthcoming release and ‘Ladbroke Grove’ in particular signposts a bright future. The addition of some bubbling synths adds an interesting dimension to cuts like ‘Make a Difference’ and ‘(I Don’t Like) Going Places’. A duo (supplemented by live drums) whose closer, ‘Broken Homes’, will ensure we’ll hear more from The Goldborns in the future.

Glen Matlock’s status as the original bass player in the Sex Pistols has been a double-edged sword. It’s ensured longevity but it’s also cast a long shadow. In truth his work with the Pistols is only a small part of a stellar discography and for his current tour he’s assembled an all star band to shine a light on his impressive back catalogue. Opening with the aptly titled ‘Won’t Put the Brakes on Me’ finds Glen and band in fine fettle, hitting the ground running with the lively ‘Wanderlust’ snapping at its heels. Still powered by a righteous indignation ‘Consequences Coming’ finds Glen reporting on the perilous state of current affairs whilst wrapping serious comment in a delicious melody. 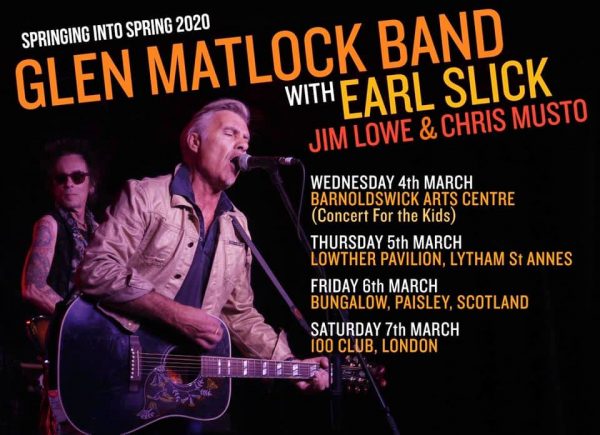 Rather bizarrely Glen Matlock was lampooned while in the Pistols for his inherent melody and strong song sensibility but it’s a deep love of music that’s serving him well as the rockabilly romp of ‘Sexy Beast’ sits easily aside the smouldering ‘Hook in You’. The first of four covers appears in the shape of Scott Walker’s ‘Montague Terrace’ alongside his own ‘Magic Carpet Ride’. The humorous ‘On Something’ proceeds ‘Can’t Be Myself’, a song with more than a nod to northern soul, that flails around and captures the whole venue in it’s slipstream. A cool rendition of Richard Hell and the Viodoids ‘Black Generation’ captures the ebb and flow of the original as ‘Who’s Side Are You On’ and ‘Keep on Pushing’ bring us to the end of the set.

With guitar legend Earl Slick in his band along with a legendary rhythm section in the shape of drummer Chris Musto and bassist Jim Lowe, you’d think things couldn’t possibly improve but then the band return for encores with former Sigue Sigue Sputnik guitarist Neal X in tow. Thankfully Glen cares enough about his past so we can relive a little of ours so the band launch into ‘Pretty Vacant’ and that’s the sign for all kinds of mayhem to erupt as beer flies and fists pump the air. The triple guitar attack is put to good use on set closer, and it’s another cover in the form of the Small Faces ‘All or Nothing’. Creating a huge wall of sound Glen & Co put a distinct twist of Americana on this quintessential English classic and the huge sing-along that accompanies is the perfect note on which to end.

Glen Matlock Set list:
Won’t Put the Breaks on Me
Wanderlust
Consequences Coming
Sexy Beast
Hook in You
Montague Terrace
Magic Carpet Ride
Hot Water
On Something
Can’t Be Myself
Blank Generation
Born Running
Who’s Side Are You On
Keep on Pushing

Encores
Pretty Vacant
All or Nothing