Glamrock became an integral part of the UK rock’n’roll subculture in the seventies. Despite the fact that many artists ran out of dreams and direction toward the end of the decade, a handful of homegrown rock bands dispensed with their stack heels and continued to carve out their own career. One such band was Girl. That this band was the breeding ground for Def Leppard (Phil Collen), LA Guns (Phil Lewis) and a significant part of the UK film industry (Gerry Laffy) has been well documented, but their two albums, Sheer Greed (1980) and Wasted Youth(1982) have been largely forgotten.

This Cherry Red expanded reissue focuses on the 1980 debut, and cleverly adds a second disc, Live In Osaka 1982, recorded when the band were touring the follow up release.

Putting the androgynous look very much to oneside – it was an image, not a lifestyle – on Sheer Greed the band come out punching hard from the bell. You can clearly hear the band’s punk roots pushing up through much of the material here. Songs like ‘Hollywood Tease’ and ‘Lovely Lorraine’ owe just as much to the in-your-face garage rock of US sonic pioneers, Television, as they do to the Glamrock of the previous decade. Elsewhere, ‘Heartbreak America’ and ‘Do You Love Me’, a Kiss cover, point emphatically (and perhaps longingly) toward the stadiums of the USA. It’s an album that just crackles with electrifying performances and great songwriting, and maybe just needed someone to set the compass.

Three bonus tracks on the disc, mainly showing off the band’s exquisite taste, in covering the legendary Russ (Argent) Ballard’s ‘Love Is A Game’ and Ray (The Kinks) Davies’s ‘You Really Got Me’).

Live At Exposition Hall, Osaka, Japan, 1982, a rich mix of songs from both Sheer Greed and Wasted Youth, is a genuine bonus here. Some bands just can’t cut it live. Others, like Girl, are right at home in the milieu in which their sound took shape and form.

The one two punch of opener, ‘Wasted Youth’, raw and powerful, gets the gig off to a recognisably heavy start, and considering this was 35 years ago, the audio shows considerable clarity and depth. Highpoints ‘Tush’ and ‘Overnight Angels’ ramp up the bombast and the decibels, and there’s a static intensity to ‘My Number’, a bubbling undercurrent that you feel sure will give way any moment now, and explode in a cacophany of noise.

Interestingly, ‘Make It Medical’, ‘This Town’ and ‘Mad For It’ started life as candidates for inclusion on the band’s first two albums, but didn’t make it until ‘Killing Time’, in 1997. Hard to believe they didn’t make the cut first time round. 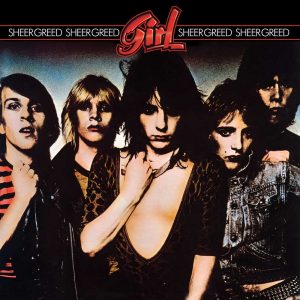