Mainman W. Sarantopoulos (aka Elektrokutioner) has his dexterous and debauched fingers in many death metal pies (yes they exist, I checked) and at no point has this been deleterious. Feasting long and deep on the putrescent feculence of the underground’s coarsest cloaca has provided much in the way of succour for the ugly and abrasive death/doom hybrid known as Ghoulgotha. A demo in 2012, an two-track 7” and a split with Into Darkness in 2014, and their debut full length, The Deathmass Cloak, in January 2015, a year and a half later and the band are back to continue spewing eternal sickness with their second album, To Starve the Cross.

Opening any album with “Hast thou eyes of flesh? Dost thou see as man sees?” from John Carpenter’s 1995 movie Village of the Damned (the line taken from the Book of Job, 10:4) is enough to strike terror into the soul of anyone (assuming there is such a thing as the soul, of course), but when it’s immediately followed up by the discordant death metal savagery of ‘Village Of Flickering Torches’ it becomes so much more potent. Follow that up with the doom-dragged distorted disorder of ‘Pangaea Reforms’ and the oppressive heft of ‘The Sulphur Age’ and you’re onto a winner.

With the disorienting time-signature twists of ‘Abyssic Eyes’ and the warped melodies and gruesome groove of ‘A Lord In The Shattered Mirror’ making for a disturbing and disconcerting experience, by the time ‘Damp Breeze of Sleeping Veins’ appears, you’re wondering how far Sarantopoulos and co. can go without running out of ideas or their signature sound becoming a gimmick. Short answer: very far. And they just keep on going.

‘Visceral Seas’ is a down-tempo, jarring and hellishly twisted slab of sickness and depravity. The death metal onslaught of ‘Thou, Beneath Ligaments Foul’ is delivered with such grisly glee, the shift between down-tempo dirge to full-on attack is nothing less than gruesome. Dabbling far too briefly in atmospherics, the keyboards and acoustic guitar that open ‘Wounds Immaculate’ adds another intriguing element to the aesthetic before we get more of the abominably warped time, tempo and feel shifts flooding in. And with ‘A Holy Book Scribed By Wolves’ bringing the album’s most powerful strike – the beautiful acoustic guitar coda rounding it off perfectly – To Starve the Cross ends on a crushingly heavy high.

The atonal approach cemented into the deformed and discordant death metal riffing and diabolical doom of Ghoulgotha’s releases has proven to be a gorgeously perverted and devilishly disfigured delight. The musicianship on To Starve the Cross is flawless. Sarantopoulos’s inhuman glass-gargling gurgle remains as menacing as it ever was, the guitar work is incredible, the disharmonious melodies are intelligently designed and the shifts between tempos, feels, and time signatures are exceptional. Though the band’s technical ability sometimes tends to dominate and so the album can occasionally feel mechanical, this is a well-written, well-executed and well-produced albumthat proves beyond a shadow of a doubt that Ghoulgotha does death metal depravity like no other. Essential. 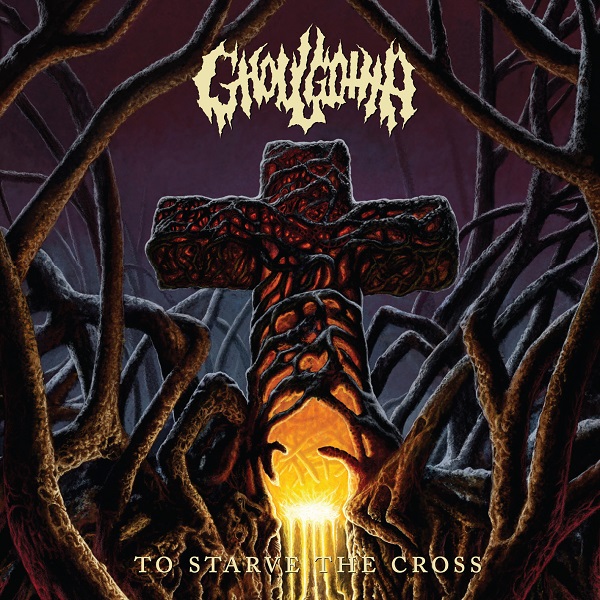