On their maiden UK tour in 2011 occupying a 20-minute stint on a bill topped by Trivium, no one could have predicted the lofty heights that Ghost has reached. No one. But even back then there was just something about them. But let’s face it, it’s pretty hard to forget seeing a rogue pope who doesn’t speak, in a room lit with dark lighting swinging incense, accompanied by a band of masked ghouls.

Now worlds away from the almost laughable “dollar store” Halloween attire they once donned, Ghost, has weaved their mysterious psalms all the way to the UK’s arenas for the very first time in their career. Tonight, they’re ticking Wembley Arena off the bucket list on the European finale of the Prequelle album and the venue is absolutely packed. 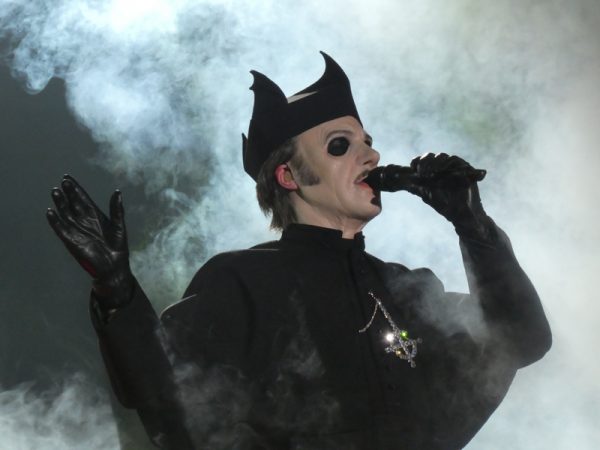 The usual fanfare of pomp and circumstance instrumentals greeted fans ahead of the band taking to the stage in the form of Klara Stjärnor and Miserere Mei, Deus before the lights dimmed and Wembley squealed as Ashes boomed across the sound system. And when the curtain dropped revealing the seven nameless ghouls assuming their positions as Rats launched into play, all hell broke loose. Then he emerged in all his red-suited glory, strutting from stage left, the main man, Cardinal Copia, greeted with huge crowd participation on the RATSSSSS chorus sections. That is how you make your big entrée on stage folks.

They backed up Rats with Absolution before the booming drum bangs and guitar trickery of Faith thundered across the arena with the dapper Cardinal commanding every inch of the stage. “This is a song that Papa used to sing” the Cardinal exclaimed before the Grand Theft Auto Vice City-esq Mary On A Cross kicked in to even more applause. Say what you will about Ghost’s departure from the rawer sounds of the Opus Eponymous days but when they’re bringing out funky songs like this, oozing in catchiness, that comfortably sit alongside the earlier material in the live environment, it’s hard to fault the direction Ghost has morphed into. Whilst this song (and Kiss The Go-Goat) are said to be off-piste and more of an accompaniment to the story narrative of the various characters that Forge has created, than an indication of the bands’ future musical direction, we sure hope to see both songs in future setlists. 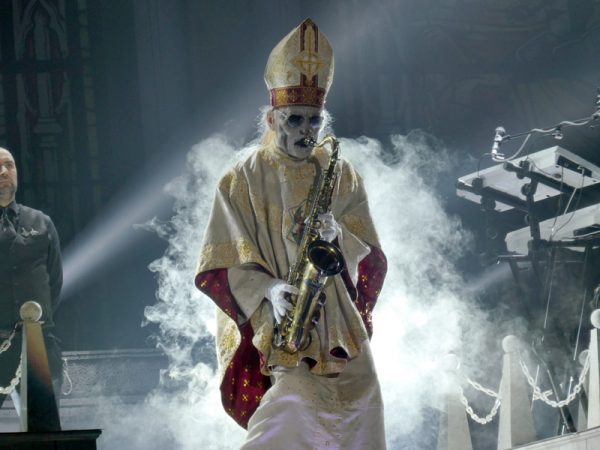 But it wasn’t just about the main man. The Ghouls (and Ghoulettes up on the keys) also had their moments to shine on the in-between song instrumentals showcasing the likes of Helvetesfönster, Spoksonant and Devil Church. Miasma took all of the cake though as Papa Nihil entered the stage staircase armed with shades and his trademark saxophone whilst being flanked by his own personal guards.

As good as Papa and his sax were though, this was topped by one moment in particular that occurred during the Ghoul’s guitar duel segment which preceded Cirice. On each night of the tour, the band has paid tribute to the cities they’re in by playing songs related to the area or by artists from the area and you’ll never guess what these crafty ghouls pulled out in London – only the EastEnders theme song! It was so random and British that you couldn’t help but laugh at it. A true stroke of spontaneous genius that we’re still talking about now. 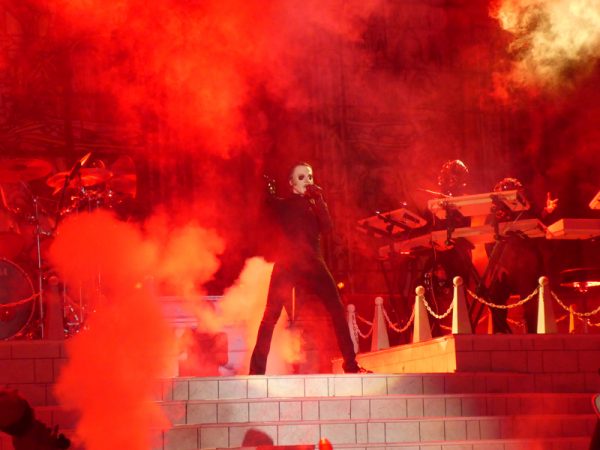 Squeaky sounds then rolled over the arena PA – what could possibly be coming next you say? Oh, just Cardi C rolling onto the stage, dressed in white on his beloved tricycle and pumping his fists in the air with boyish delight in time for a storming rendition of the ballad-y and funky Ghuleh/Zombie Queen. Nothing to see here people. If the atmosphere wasn’t hyped enough, the suave cardinal, now dressed in white with a dapper black hat ,whipped the London crowd into a frenzy by clutching his privates and pretending to be embarrassed – a possible subtle nod to the fan page that exists for fans of Cardi C’s legs (yes this is a real thing). You can’t help but love the showmanship that Forge puts into the characters he creates with stunts like this across the set. Papa III was great but the slightly awkward but much loved Cardi C is a whole other kettle of fish.

He didn’t stay in the white attire for long though. Next, he appeared in the black cardinal outfit and hat although bizarrely had no swinging incense with him for the next triage of songs. Spirit, the thundery bass tones of From The Pinnacle To The Pit and the mighty Ritual raised the Wembley roof some more.

He Is once again firmly cemented itself as THE Ghost ballad and even though we’re crying inside that America got the stunningly beautiful Life Eternal ballad and the UK likely won’t ever get to see it performed live, it shone brightly in the arena setting. Lighters were swiftly put away by the time the heaviest song in the setlist, Mummy Dust, came up as assed were wobbled and were tickled.

If the ass wobbling and taint-tickling tunes weren’t enough for Wembley by that point, the disco-fused Dance Macabre came next as multi-coloured rainbow lights dimmed on the arena for what was surely the loudest sing-song of the night. The second verse saw the cardinal team up with one of his ghouls (the duo is known to fans as Frick and Frack) to do a spontaneously quirky one-footed ballroom-Esq spin. Obviously, they nailed it. The theatrical moments in the show may be slick and choreographed but still manage to bring a certain air of spontaneity as though it could be the first time, they’ve ever performed them. 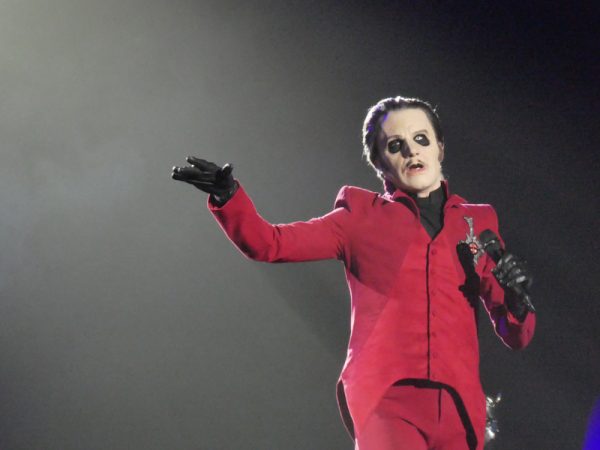 But as dazzling as this may have been, the Cardinal still had one last trick up his sleeve in the form of the splendidly brilliant Square Hammer. We can confirm with some conviction London was definitely on the square and the level as plushie Cardi C dolls were raised to the ceiling and dollar bills bearing the Cardinal’s face and serial number 666 landed all over the buzzing crowd.

As the band took their last bow and left the stage, only Cardi C was left on stage atop of the steps in a darkened room with a beaming spotlight, curtseying one last time until the lights suddenly flickered and darkness fell upon the Wembley Arena and he was gone.

This surely the band of the decade and you get the sense that they still have much, much more left to give. We are witnessing this generations answer to the Black Sabbath’s, Metallica’s and Iron Maiden’s of the metal world. And it’s damn well exciting and thrilling to watch this magic unfold. You almost get a sense that Tobias Forge can’t quite believe it all himself.

The world now eagerly awaits what the fate of the much-loved Cardi C will be… and perhaps we just might get that answer when the band takes to Mexico for their only show of 2020. We’ve already got our tissues ready.