Once upon a time in a galaxy not so far away, audiences loved the enigmas that rock and metal bestowed upon them. Band stories became the stuff of legend and soon, that of  myth. Once intrigued, here we are in the twenty first century, disillusioned by the parade of even the biggest and best bands dropping their knickers and dangling their most private of parts before us in glorious Technicolor. But whatever kind of monster you consider them, Ghost BC have nailed it. In an era where every band seems to be surrendering to this pseudo-celebrity online lifestyle and spending minutes, hours, and days confessing to all and sundry their every activity, no matter how trivial, in an attempt to catapult themselves into the upper echelons of our metal deities, Ghost BC have dismissed this pathetic culture and hidden behind a ghoulishly majestic persona manifest in music, costume, and stage. With Infestissumam still worming its way into the blackened hearts and sordid minds of the band’s ever-expanding audience, Ghost BC have brought unto us an EP of covers produced by Dave Grohl.

And oh what taste they have! The opening track, a cover of Roky Erickson’s ‘If You Have Ghosts’, is perfect. With Papa Emeritus giving us a knowing wink and sounding almost like R.E.M.’s Michael Stipe (maybe that’s who it is behind the mask!), it becomes a hilariously perverse and altruistic self-help track. The cover of Abba’s ‘I’m A Marionette’ is suitably pathetic, the juxtaposition of the victim script lyrics with the shift to diminished chords in the chorus adding a sinister edge in-keeping with their flamboyant evil image. ‘Crucified’, originally by Swedish dance musicians and 2013 Eurovision hopefuls Army Of Lovers, continues their mockery of the Church in as high camp fashion as can be mustered in five minutes. And Depeche Mode’s ‘Waiting For The Night’, in summoning the tranquillity that comes with the darkness, is just side-splittingly morose. Where other bands usually choose tracks that  have influenced them to cover, Ghost BC have chosen tracks that augment their identity, to the point that the tracks sound as of they were written for Ghost BC. Genius.

Ghost BC parody all that we have lost from our fallen idols. Where power metal celebrates them, Ghost BC have mastered the clichés, repackaged them, and wrapped them up in a healthy dose of irony and self-awareness. If they’re taking the piss, let us micturate in solemn prayer and joyous celebration ‘neath the golden shower of the divinity that mocks his own creation. We’ll be fine: we have Ghost; we have everything. 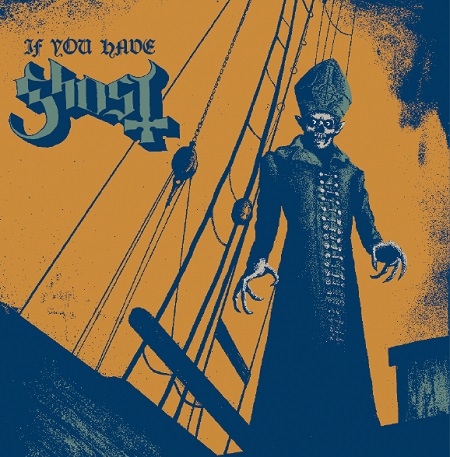